MADRID: Even the Real Betis fans were applauding by the end as Lionel Messi scored another spectacular hat-trick to fire Barcelona to a 4-1 victory on Sunday and leave them with one hand on the La Liga trophy.

Messi's treble, his second in a month in Seville, fourth of the season and 51st of his career, moves Barca 10 points clear of Atletico Madrid with 10 games left to play, a gap surely too big to close.

"We had a great opportunity to increase the gap on Atletico, we had to take it tonight."

Luis Suarez, whose superb flick set up Messi's second, scored his own brilliant goal after a scintillating solo run but it was ultimately reduced to a footnote, in what became another night all about his Argentinian partner.

The only blot was the sight of Suarez limping off late on, with what coach Ernesto Valverde suspected was a "bad sprain" to his ankle.
Messi now has 29 league goals this season, 39 in all competitions, and together with Suarez's 18 their joint-total of 47 is more than all but two of the other teams in the division.

A simple finish from Suarez's exquisite assist came between a free-kick perfectly planted into the top corner and a bending lob that grazed the crossbar and dropped in.

The Betis fans left at the Benito Villamarin, and most of them were, felt compelled to stand and applaud.

"I don't remember the opposition cheering me for a goal, I am very grateful

This was supposed to be one of the more awkward tests in Barcelona's run-in, which includes Atletico Madrid at home and fifth-placed Alaves away.
All the rest of their opponents currently sit 10th or lower.

But regardless of the fixtures, Barca seem to be saving their best for the home straight, which bodes badly for Manchester United, whom they face in the Champions League quarter-finals next month.

Already in the final of the Copa del Rey, where Barca will return to this stadium to face Valencia in May, a treble is certainly not beyond the realms of possibility.

No time to breathe

There was barely a moment to pause for breath in the first half, both teams throwing players forward without restraint or, seemingly, regard for the spaces they left at the back.

Betis were happy to open up and almost took the lead when Joaquin volleyed first-time to the stretching Sergio Canales, but he was unable to connect.

Barca were perhaps fortunate to earn the free-kick for Messi's opener as Canales obstructed Arthur Melo just outside the area, to the right of centre.

But there was no luck in Messi's shot, which flew like a dart over the ducking head of Gerard Pique, past the hand of Pau Lopez, and into the top left-hand corner.
Betis came again, Arthur twice scrambling the ball away from Canales in the box, before Suarez missed a sitter after being teed up by Messi. 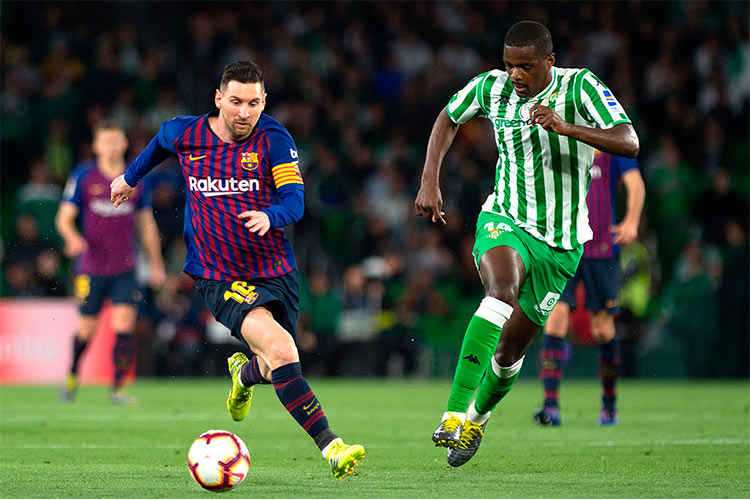 He made amends just before half-time. Messi fired into the feet of the Uruguayan, who took the ball one way and flicked it the other, behind his leg and into the path of Messi, who did the rest.

Betis could have been four down by the hour as Suarez missed two more, but the chances kept coming, and he finally hit the mark.

There were four defenders ahead when he began his run from the halfway line but Suarez sped past one and between two more, each of them colliding into the other before being left sprawled on the ground.

Aissa Mandi made one final lunge but Suarez skipped through to finish.

Loren Moron curled in a consolation for Betis but Messi had the final say. Ivan Rakitic rolled the ball back and he clipped a sumptuous chip over Lopez, off the crossbar and in.

Suarez limped off injured in the final minutes and Messi could have added a fifth, only for the post to rescue Betis. Four was enough.