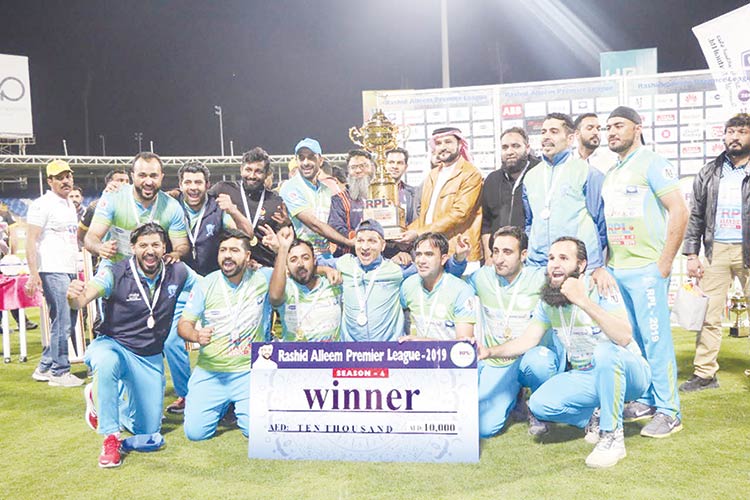 Dr Rashid Alleem presents the trophy to Dnata CC, who won the RPL title after winning the final against Sewa.

SHARJAH: Dr Rashid Alleem, Chairman of Sharjah Electricity and Water Authority (Sewa) and Head of Alleem Knowledge Centre, has hailed the success of the fourth edition of the Rashid Alleem Premier League, which concluded at the Sharjah Cricket Stadium on Friday.

Over 750 players and 48 teams took part in the fourth edition of the UAE’s biggest corporate cricket extravaganza, which started on Feb.15.

Speaking after presentation ceremony, Dr Alleem said: “ This tournament will leave a strong legacy of corporate engagement across the country. The main aim to organise the event was to promote a healthy lifestyle in the UAE.” Dr Alleem also congratulated Dnata CC for their victory in the final. He also thanked all the participating teams for the professional manner in which they have conducted themselves on and off the field.

RPL, a highly popular corporate cricket tournament in UAE, registered under Sharjah Cricket Council, was organised by Alleem Research and Development Centre since 2016 and had a successful 4th season in 2019. 100 matches were played during the event which were held at the three venues, including Ajman Oval, Hamriya Cricket ground and the Sharjah Stadium.

The tournament has seen rapid rise in the terms of participation. Even teams from India and Pakistan competed in the RPL’s different editions.

The RPL falls in line with the vision of spreading positive energy and healthy environment in the society. Dr Alleem launched the Alleem Research and Development Centre in 2015.

On Friday, Mohammed Iqbal smashed unbeaten 74 off 46 balls and Krishnachandran hit 23 of 16 balls as Dnata CC emerged winner in the final after overhauling the target of 109 runs set up by Sewa.