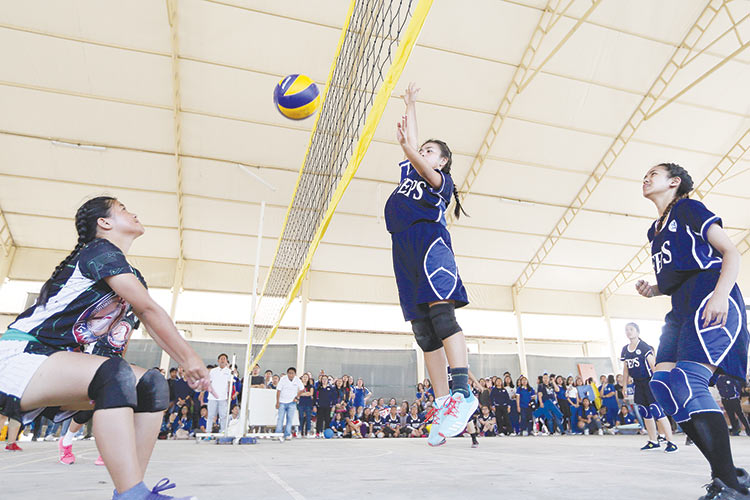 DUBAI: The third season of the “Congen’s (Consul General’s) Cup Inter-School Basketball & Volleyball Tournament 2019” organized by the Philippine Consulate General in Dubai opened at the Dubai Club for People of Determination in Al Qusais on Saturday morning.

Among the dignitaries at the ceremonies were visiting Overseas Workers Welfare Administration deputy administrator Josefino Torres who attended a Ministry of Human Resources and Emiratization conference last week and Labour Attache for Dubai and the Northern Emirates Felicitas Bay.

Before the Torch Relay-cum-Lighting of the Flame at the open field, Consul General Paul Raymund Cortes expressed his utmost gratitude to the participants, all from Sharjah.

“We could not have done this without (your) support. Thank you for this opportunity you have given us (to stage these) friendly competitions. I am grateful.” The diplomatic mission believes bringing the youth together through amicable sporting activities will help instill in them the “intellectual and mental faculties” they need to go through life as humanely as possible.

Cortes pointed out that 30 years ago, sports and athletics were considered extra-curricular activities with no bearing and somehow students were discouraged and advised by their parents to concentrate more on their academics.

He stressed without particular references: “In these times that we are in, we need more of these activities for the development of our physical and mental faculties to become better people, to be respectful, tolerant, (and be open) in taking each other’s different faiths and religions).” Volunteers for the Congen’s Cup chairman Richard Zulueta administered the Oath of Sportsmanship.

The coaches along with the technical staff of each of the teams pledged as well “to abide by the rules of the game, to play the games according to the rules, to obey and respect the officials of the games; to be patient enough in times of disagreement, to be humble in victory and magnanimous in defeat; and to do my best when playing the game not only for the honour of my team, but above all, for the glory of sports.” Alex Cruz, father of NFPS Grade 8 drum-bugle-lyre band member Michaela Alexia Cruz, was delighted for the diplomatic mission’s agenda.

He said the tournament encourages sportsmanship and goodwill beyond the four walls of each of the campuses and teaches everybody to reach out to everyone.

Manju Jennica Shetty, Feps-Al Azra Campus Grade 8 volleyball player has been into the sport in the last four years. She is “excited, thrilled and nervous at the same time.

NFPS assistant school principal Victoria Geges termed the tournament as “challenging” since everyone is expected to demonstrate their prowess and skills in light of tolerance and acceptance of circumstances, specifically in the face of win and loss.