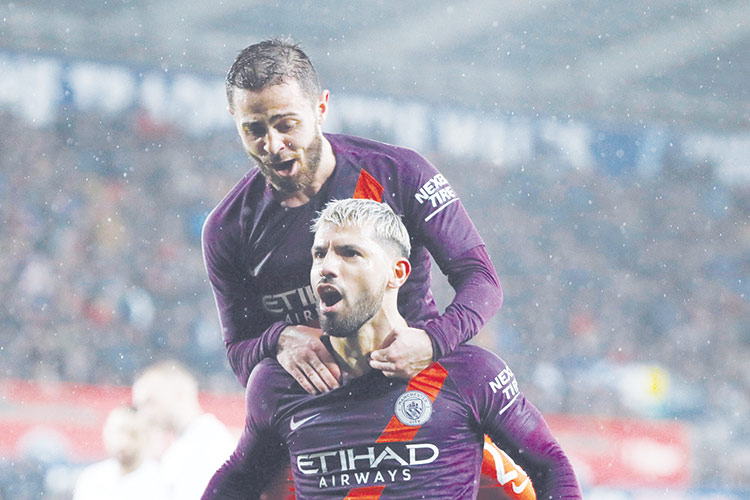 Manchester City’s Sergio Aguero celebrates with Bernardo Silva after scoring a goal against Swansea during their FA Cup match. Reuters

Swansea : Pep Guardiola issued a public apology after Manchester City rode their luck to storm back and beat Swansea 3-2 in the FA Cup quarter-finals on Saturday and stay on track for a quadruple.

The City manager’s decision to name Sergio Aguero and Raheem Sterling among his substitutes at the Liberty Stadium in south Wales looked set to backfire as the Championship side made the most of their absence to surge into a surprise two-goal first-half lead.

Swansea looked set to end City’s four-pronged pursuit of honours when they took command of the tie after Matt Grimes converted a 20th-minute penalty and Bersant Celina finished off a fine move by curling a shot beyond Ederson nine minutes later.

The Premier League leaders mounted a stunning recovery to overcome the daunting deficit after Sterling and Aguero entered the fray either side of the hour mark but the win was achieved in controversial circumstances with the equaliser and Aguero’s winner hotly disputed.

After Bernardo Silva pulled a goal back by curling a shot beyond the impressive Swansea goalkeeper Kristoffer Nordfeldt, TV replays suggested that City were the beneficiaries of two incorrect decisions by referee Andre Marriner that may have been overruled had the VAR system been in use.

Marriner pointed to the spot after Cameron Carter-Vickers was judged to have tripped Sterling.

Aguero’s penalty struck the post and went in off Nordfeldt while Aguero’s winning goal, a stooping 88th-minute header, should have been disallowed for offside.

United lacked spark throughout and were overcome by an eager Wolves side with two goals in the space of six minutes in the second half from Raul Jimenez and Diogo Jota. Marcus Rashford’s injury-time effort was a mere consolation. Solskjaer had presided over a run of just two defeats in 18 games since replacing Jose Mourinho in December, progressing to the quarter-finals of the Champions League and the last eight of the FA Cup.

But now they have suffered two losses in a row after their Champions League exertions at Paris Saint-Germain.

United were favourites but the Midlanders’ form against the top six that has carried them to seventh position in the Premier League gave home fans hope. The early signs were that United, not Wolves, were going to live up to the hype of the warm-up, dominating early possession.

The visitors created the first opening when Paul Pogba gained a yard of space in the box and curled wide.

Brighton came from 2-0 down and were then behind in a shoot-out before they beat Millwall 5-4 on penalties to reach the semi-finals of the FA Cup on Saturday.

It seemed Championship strugglers Millwall were on the brink of delighting their home crowd at the Den at 2-0 up with just two minutes of normal time left after second-half goals by Alex Pearce and Aiden O’Brien.

But Brighton pulled one back through Jurgen Locadia and then, in the fifth minute of added on time and the last act of regulation play, Solly March’s seemingly harmless free-kick into the box left Millwall goalkeeper David Martin flapping at the ball before it settled in the top corner to give the Seagulls an unlikely equaliser.