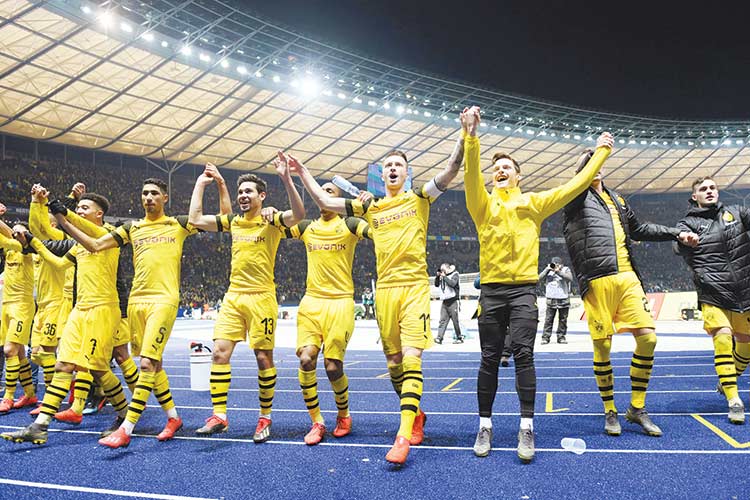 Borussia Dortmund players celebrate after their victory over Hertha Berlin in a German League match on Saturday. Reuters

Between them, centre-forward Kruse and winger Rashica are on fire with six goals and three assists in the last four league games and the duo did the damage against Leverkusen.

Under new coach Peter Bosz, Leverkusen have shot up from mid-table to sixth and the Europa League places by winning all but one of their last seven league games, but with playmaker Kai Havertz benched for the first half, they struggled.

Bremen doubled their lead on 37 minutes when Kruse played Rashica into the box and the 22-year-old winger grabbed his third goal in two games after a brace in last week’s 4-2 rout of Schalke.

At 2-0 down, Havertz came on for the second half, but despite his linking up with Germany winger Julian Brandt, Bremen’s defence held up in open play.

Earlier, Borussia Dortmund returned to the top of the Bundesliga on Saturday after Marco Reus’s late winner sealed a dramatic 3-2 victory at Hertha Berlin, who finished with nine men.

Dortmund’s win leaves them three points clear of defending champions Bayern Munich, who are now under pressure to bounce back from their Champions League exit to Liverpool by beating Mainz on Sunday.

Ivorian striker Salomon Kalou scored both of Hertha’s first-half goals with Thomas Delaney and then Dan-Axel Zagadou twice equalising for Dortmund. Reus’ late strike at Berlin’s Olympic Stadium finally saw off Hertha, who had defender Jordan Torunarigha and substitute striker Vedad Ibisevic sent off in the final few minutes of a bad-tempered match.

Kalou capitalised on a mistake by Dortmund goalkeeper Roman Burki with just four minutes gone to give Hertha the lead.

Delaney equalised by charging through a huge gap in midfield and firing home, his 14th-minute shot deflecting off Hertha defender Karim Rekik.

Earlier, Schalke’s miserable run was extended to six straight defeats after losing 1-0 at home to RB Leipzig in Huub Stevens’ first game back as head coach. The Schalke legend has been hastily hurried back for his third stint in charge after predecessor Domenico Tedesco was fired on Thursday, two days after the Royal Blues’ 7-0 thrashing at Manchester City in the Champions League.