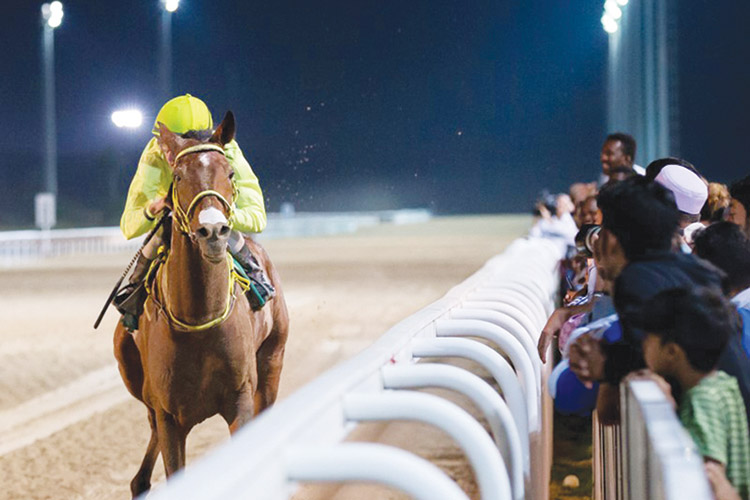 Balad Al Reef, ridden by Szczepan Mazur, races towards the finish line to win final round of the Al Ain Marathon Series on Saturday.

Al Ain : A 5100m Prestige handicap, the final round of the Al Ain Marathon Series was the official feature at Al Ain on Saturday and won for a third time in four years by Balad Al Reef, saddled by Abdallah Al Hammadi for Al Ajban Stables, the pairing also responsible for runner-up, Hareer Al Reef.

First contested in 2015, Balad Al Reef landed the severe stamina test in both 2016 and 2017 before disappointing when he came fourth last year when the race was won by Ajjaj.

Ridden for the first time by Szczepan Mazur, fresh from landing the Group 1 Emirates Championship at Abu Dhabi yesterday on BF Mughader, the 8-year-old was ‘put to sleep’ out the back before making smooth progress halfway around the final bend when stable companion Hareer Al Reef had taken the initiative under Elione Chaves.

Mazur’s mount looked likely to win easily, but having entered the long straight on the inside of his stablemate and locked on the far rail, once in front he made a beeline for the nearside rail, forfeiting considerable ground and offering Chaves’ mount a glimmer of hope. However, once on the rail, he ran on strongly.

“I was happy to let him drift because he has done it before, so I was expecting it and there was little point fighting him,” Mazur said. “Once we regained our momentum he was always going to win and clearly relishes these marathon stamina tests.”

Pat Cosgrave was in the saddle. In providing his powerful connections a first win in the race, inaugurated in 2016, the colt was doubling his career tally, on his seventh start and fourth on dirt, having won his penultimate start in a course and distance maiden before finishing tailed off over 1700m at Sharjah.

“The last time I rode him, I went too early and was caught over this course and distance,” Cosgrave said. “I learned my lesson from that so took my time a bit more today and, in fairness to the horse, he has run on gamely and all the way to the line. I rode him at Sharjah after his victory, but that was just eight days between races, so I’m not sure if it was the surface or the quick return to action he had a three week break before this which has obviously suited him.” Having posted local winner 505 aboard AF La’Asae in the finale at Abu Dhabi yesterday to become the UAE’s winning-most jockey, Tadhg O’Shea wasted no time adding to his record mark, registering a comfortable victory in the opening 1600m handicap on AF Al Baher, like his historic success trained by Ernst Oertel for Khalid Khalifa Al Nabooda. In a race restricted to horses in private ownership, O’Shea was happy to track AF Al Mehleb until setting sail for home fully 700m out with his mount, a homebred 6-year-old, soon opening up a decisive gap before galloping strongly to the line. Third on his latest two outings, he won his previous one, a 2000m handicap, under O’Shea. This was his third career victory, all on this course, having also landed a maiden over 1800m on just his second career outing, in December 2017.

“This horse deserved another win because he has been running well but finding a few too good, in his last two races” Oertel said. “We were all delighted to help Tadhg break the record because he is very much part of our team.”

An hour later, connections were celebrating a double after a 1400m maiden for those foaled locally was won comfortably by AF Mekhbat, originally first reserve but took full advantage of a late berth in the starting stalls. The maximum field allowed of 15 may have gone to post, but only three ever really mattered with early leader, Saarookh, who eventually ran on for second, passed 600m out by Marayah, who soon lost the initiative to the winner and the runner-up position was snatched from her close home.

The only Thoroughbred contest was a 2600m handicap and it produced a carbon copy of an identical course and distance from a month ago when Jamesian went clear at the top of the long Al Ain straight, only to be caught in the final 100m by Secret Trade, who has now won his three most recent outings having previously won a 2000m handicap on what is obviously his favourite UAE course. Trained by Ali Rashid Al Rayhi for Sheikh Abdul Aziz Bin Humaid Al Nuaimi, the 6-year-old gelded son of Teofilo, as was the case four weeks ago, was partnered by Antonio Fresu who was again hard at work with 1600m still to run with few of his 14 rivals behind him.

However, as he did last time, once leaving the home turn they made relentless progress before sweeping past Jamesian to win going away at the line to break his own track record over a course and distance only utilised the twice to date.