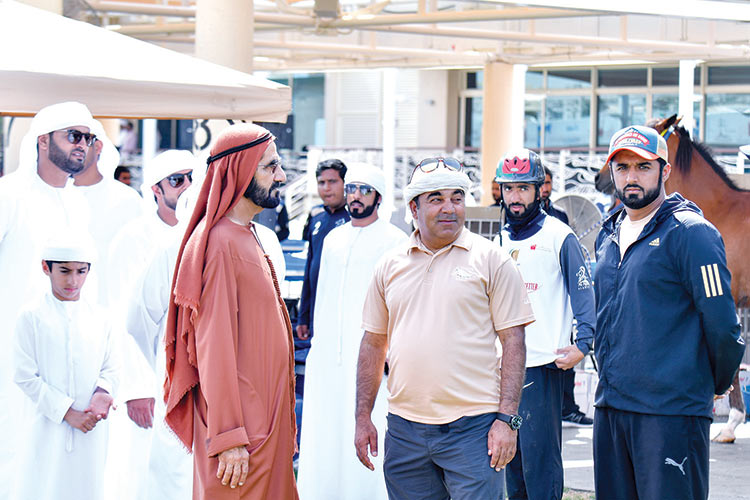 Sheikh Mohammed attended part of the four-stage endurance event, which is considered key part of the local endurance-racing season followed by endurance race professionals and enthusiasts from the UAE and abroad.

The festival was sponsored by Meydan Pillar Partners Emirates Airline.

The festival continues to draw inspiration from Sheikh Hamdan and his tireless contribution to the development of sport in Dubai and the UAE.

The crown Prince is Chairman of the Dubai Sports Council, where he serves as a role model for locals and expats alike. A world-class endurance athlete himself and winner of several prominent international titles, he is committed to offering locals a variety of platforms which allows them to participate in and excel in sport.

The Dubai crown Prince Endurance Festival is one such effort, which allows riders and horses from the region to compete against elite international athletes.

Meanwhile, a new member joined Godolphin’s growing band of Australian two-year-old winners in Melbourne on Saturday,  and an old one moved up a peg or two in Sydney.

On a day when the local stable finished second and third in the inaugural $5 million All-Star Mile with Hartnell and Alizee at Flemington, it was the juveniles who again starred.

First to strike was Flit who dead-heated with Ready Set Sail to win the G3 Thoroughbred Breeders Stakes at Flemington, while Kaimichi led throughout to win the G3 Magic Night Stakes at Rosehill.

Having only her second start Flit, a daughter of Medaglia d’Oro, turned in an encouraging effort to hang on to a share of the victory after seemingly certain to be beaten.

Trainer James Cummings said Flit would be entered for the second and third legs of the Sydney two-year-old Triple Crown, the G1 Sires Produce Stakes and the G1 Champagne Stakes.

“She’s in some of the Sydney features but we’ll give her a few days down here in Melbourne to wind down after today’s effort,” Cummngs said.

In Sydney, Kiamichi put herself into the mix for a start in next Saturday’s $3.5 million G1 Golden Slipper with her strong win on a heavy track at Rosehill.

Kiamichi was the first two-year-old from the Cummings team to win this season, and on Saturday she won her second and the stables 20th juvenile race for 2018-19.

The win qualified her for the Golden Slipper, it only remains for Cummings to decide if she will join up to four others from his stable in the race.

“It’s just a dream to have so many nice colts and lovely fillies to be presented on Golden Slipper day,” Beadman said.

“It was a very, very positive win the way she did it at both ends.”

“She ticked another box, she can handle the ground, so it’s a wonderful position to be in to have the selection of horses that we have.”

Back at Flemington, Hartnell ran competitively in the ungraded, but high-stakes All-Star Mile, only to go down by 1-1/4 lengths to the Tasmanian filly Mystic Journey. A nose behind Godolphin’s old warrior was stablemate Alizee who looked the winner when she loomed at the 200m.