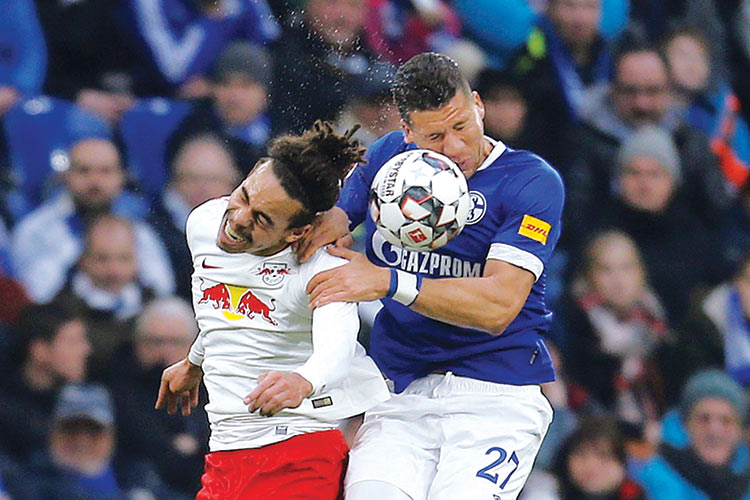 Schalke and Leipzig’s players vie for the ball during their German League match on Saturday. Reuters

Berlin: Schalke’s miserable run of results continued on Saturday as they lost 1-0 at home to RB Leipzig in Huub Stevens’ first game back as head coach.

New leaders and defending champions Bayern Munich are at home to Mainz on Sunday, while second-placed Borussia Dortmund.

Schalke legend Stevens, 65, was hastily hurried back for his third stint in charge after predecessor Domenico Tedesco was fired on Thursday, two days after the Royal Blues’ 7-0 thrashing at Manchester City in the Champions League.

However even Stevens, who lifted the UEFA Cup as Schalke coach in 1997, could not prevent the hapless squad suffering a sixth straight defeat.

Both Werner and Poulsen are now neck-and-neck on 12 league goals this season.

The defeat saw Schalke drop to 15th in the table, leapfrogged by Augsburg who enjoyed a 3-1 comeback win at home to second-from-bottom Hanover.

Sergio Cordova equalised for Augsburg to cancel out Hendrik Weydandt’s shock early goal for Hanover to make it 1-1 at the break.

Midfielders Jonathan Schmid and Andre Hahn made sure of the win with goals in the last 12 minutes to see Augsburg home.

Having suffered the heaviest European defeat in the club’s history in Manchester, Schalke’s nightmare week continues as they now sit just three points from the relegation places after Stuttgart, one place below them in 16th, managed a 1-1 draw at home to Hoffenheim.

Stuttgart had central midfielder Steven Zuber to thank for equalising against Hoffenheim, the club he is on loan from, on 66 minutes. Zuber’s superb goal cancelled out Andrej Kramaric’s opener for Hoffenheim three minutes before the break.

It was the Croat’s 13th league goal this season, having scored four goals in as many league games after two against Nuremberg last weekend.

Wolfsburg’s coach Bruno Labbadia has announced he is leaving at the end of the season, due to a personality clash with sports director Jorg Schmadtke, but the off-field politics played no part in a 5-2 trouncing of Fortuna Duesseldorf.

Towering Dutch striker Wout Weghorst scored a hat-trick in just over half an hour as Fortuna were floored by three goals in five minutes midway through the second-half with Weghorst netting either side of a Robin Knoche goal.