Nadal hopes to be ready for special Federer clash - GulfToday

Nadal hopes to be ready for special Federer clash 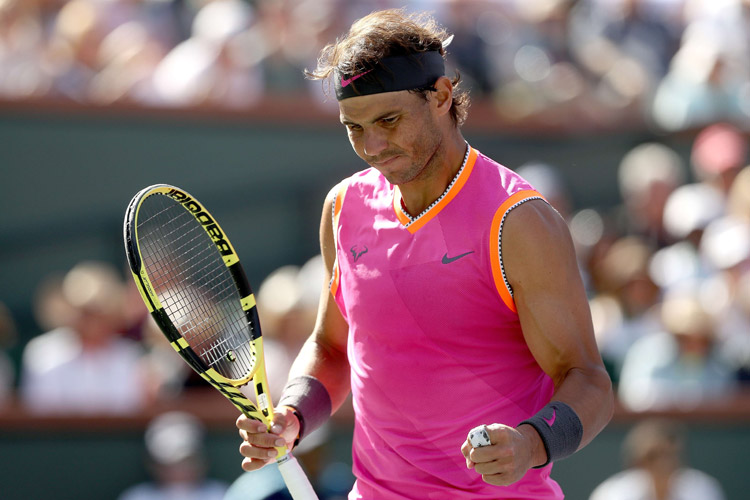 Rafael Nadal of Spain celebrates a point against Karen Khachanov of Russia during the quarterfinals of the BNP Paribas Open at the Indian Wells Tennis Garden on Friday in Indian Wells, California. Matthew Stockman/AFP

INDIAN WELLS: A hurting Rafael Nadal is “hopeful” he’ll be ready Saturday to renew his rivalry with Roger Federer in the semi-finals of the ATP Indian Wells Masters.

The longtime foes have amassed 37 Grand Slam titles between them — Federer with 20 and Nadal with 17 — and built a unique relationship over 15 years and 38 prior matches, not to mention countless promotional and charitable activities off the court together.

“If I don’t see this match as special it’s because I don’t love this sport and I don’t appreciate the story of this sport,” Nadal said after reaching the semi-final showdown with a 7-6 (7/2), 7-6 (7/2) victory over Karen Khachanov.

Federer, who defeated Poland’s Hubert Hurkacz 6-4, 6-4 to reach the semi-finals, feels the same, saying the contrast in styles and personality between himself and Nadal lend spice to their history.

After 38 career meetings, Nadal leads the series 23-15, but Federer holds a slight 11-9 advantage on hardcourts.

The Swiss great has won the last five in the series, but says that’s of little significance now that it has been almost a year and a half since their last meeting in the Shanghai Masters final in October 2017.

Nadal, too, says the contrast in styles, coupled with the pair’s sheer longevity, makes every meeting something to treasure.

“Different styles, different ways to understand the sport. And at the same time, two players with a good relationship after all the things that we went through in our careers, competing for the most important things,” he said.

There was a shadow hanging over the blockbuster showdown however, after oft-injured Nadal needed treatment to have supportive tape applied to his right knee in his victory over Khachanov.

He didn’t play again until the Australian Open, where he fell in the championship match to Novak Djokovic.

Nadal said he hoped to be ready to battle again with Federer, but with a pragmatism born of hard experience he couldn’t help but hedge.

“Of course my goal and my idea is to be ready for tomorrow,” Nadal said. “I cannot guarantee how I’m going to wake up tomorrow morning.”