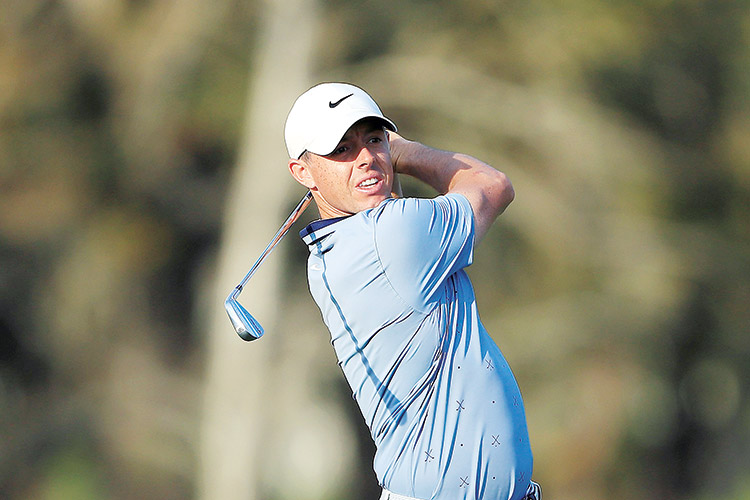 Rory McIlroy of Northern Ireland in action on the 14th hole during round two of The Players Championship in Florida on Friday. Agence France-Presse

Los Angeles: Rory McIlroy charged up the leaderboard on the back nine, firing a seven-under 65 on Friday to grab a share of the lead with Tommy Fleetwood at the halfway stage of the Players Championship.

McIlroy, of Northern Ireland, went seven under par on his final 11 holes, making an eagle on the par-five 16th, a birdie on the par-three 17 and par on the par-four closing hole to reach a 12-under 132 total.

He is tied with England’s Fleetwood who shot a five-under 67 for his sixth straight round under par.

“It was just another good day on the golf course. I did everything pretty much the way I wanted to,” McIlroy said.

“My attitude has been great all year.”

Australia’s Jason Day shot a 66 and is tied for seventh with Keith Mitchell and Kevin Kisner at eight-under 136.

After making changes last year to correct struggles, McIlroy feels he is on the right track with the Masters, and a chance to complete a career Grand Slam, just a month away.

He began Friday’s round with his lone bogey of the day before going on to make one eagle and six birdies.

“I felt like I came back well,” McIlroy said.

“Once I got a birdie on the eighth it started to snowball.”

McIlroy also slammed the PGA Tour for allowing players to take too much time between shots, describing it as an “epidemic”.

McIlroy and his playing partners had to wait on almost all the tee boxes.

“It’s become somewhat of an epidemic on tour.... Honestly, I think (the Tour) should just be a little tougher and start penalizing shots earlier, and that would be an easy way to fix it,” he said.

This is the second straight week Fleetwood has had a share of the 36-hole lead after starting quickly Friday with a birdie-eagle-birdie beginning to his round.

“It was a bit tougher today. The greens got crustier and crustier,” Fleetwood said.

“All in all I am very happy.

“Happy my game is improving and I am getting up there more and more.” Tiger Woods just made the cut with a one-under 71 but was left hovering along the cut line after a quadruple bogey seven on the picturesque par-three island green. He finished tied for 39th with a three-under 141 total, nine strokes back of the leaders.

Teeing off on his eighth hole of the day after starting on the back nine, Woods’ tee shot from 146 yards was long and left over the island green and his next shot from the drop zone was also long.

“I was pretty ticked, no doubt about that,” Woods said.

After starting the day with birdies at numbers 12, 13 and 16, Woods was at five under par. But his rough hole moved him to one under for the tournament.

He fought back with a birdie on the par-five second hole and the par-four seventh.

“I ended up getting back to three under,” Woods said. “It was a good fight.” Woods is confident he can make up more ground on the weekend.

“I just need to go out and put it together, because right now literally anybody who makes the cut has got a chance to win this tournament,” Woods said.