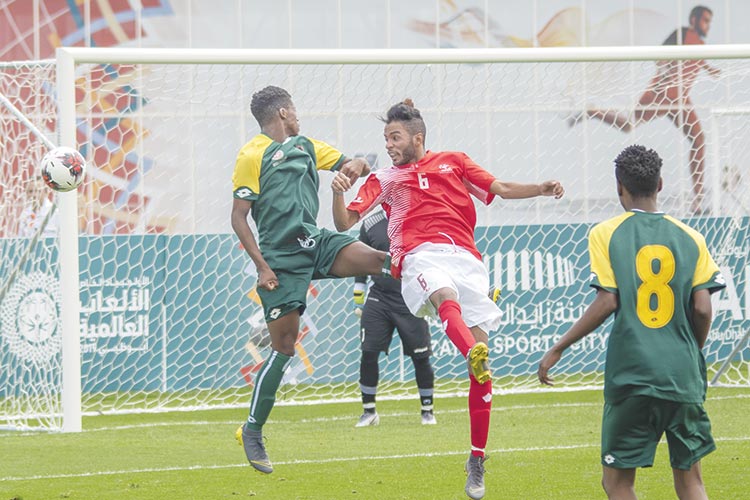 Players of UAE and South Africa in action during their match in Abu Dhabi on Friday. Supplied photo

Playing their second match of the World Games at Zayed Sports City, the UAE team recorded a 4-0 win over their opponents in a 11-a-side match.

A dominant display by the Emirati team in front of a crowd of energetic home fans saw goals scored by Ayman Al Maqbali, Abdelaziz Al Hamour with Khalid Al Maamari scoring a brace.

The victory, the UAE’s first of the World Games, means the team will be full of confidence before taking on Jamaica in its final Group A match on Saturday.

The UAE team, which features athletes with and without intellectual disabilities, narrowly lost out (2-1) to Spain in their opening match.

The UAE’s mixed volleyball side won 52-30 against Team USA.

Football made its debut at the World Games in 1986 and has become one of the largest sports on the program, featuring traditional and unified teams across the 11-a-side, 7-a-side and futsal competitions.

It was a moment to remember for Saudi Arabia as their female Bocce team won their first two World Games matches.

Saudi women have never participated in a World Games until now, with the country sending 21 women to the UAE capital. On the first day of the competition, the Bocce side could not have asked for a better start after making a big impact in the team competition with two victories.

From learning how to swim in a river filled with crocodiles to winning a gold medal at Special Olympics World Games, Yuliana Mora has come a long way.

“There is no swimming pool where she lives,” said the official. “She trained in a river close to her house. Her parents helped her as there were crocodiles in it.

“First her parents would get into the river and check if there are crocodiles and only after all is clear they would let Yuliana in to do her training.”

The official added that Mora quickly stood out as one of the best Special Olympics athletes in Costa Rica after impressing national swimming coaches.

“Yuliana represented her province, Puntarenas, in the national Special Olympics games and came first in the swimming competition and that’s how she came to represent her country,” said the team official.

“She has been training for the past year in a swimming pool for this competition.”

After her stunning victory in Dubai, a tearful Mora dedicated her gold medal to her parents back home in Costa Rica.

More than 7,500 athletes from over 190 nations are competing in the games which is dubbed as the largest sports and humanitarian event of the year.

The Unified Sports Clinic, part of the Special Olympics Unified Sports Experiences, was held at Zayed Sports City where former Chelsea and Marseille striker Drogba and World Cup winner Cafu joined the athletes for a fun 30-minute game in front of large and vibrant crowd.

Both stars interacted with fans and posed for pictures with the athletes as well as wowing the crowd by showing off their skills.

Speaking on the importance for inclusion, Drogba said: “Since I retired from football, this is the first time that l have played here in the UAE and it felt really good. I’m inspired by joining and meeting the Special Olympic athletes. This is a life lesson for me and they have chosen us to be in their team.”