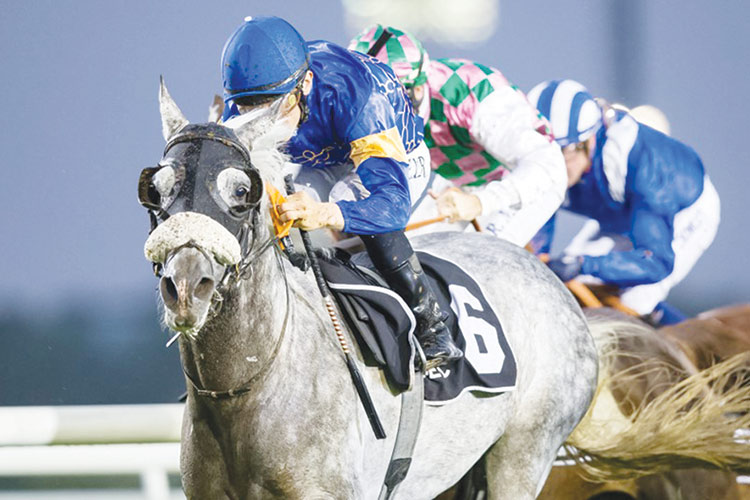 When he hit the front 400m out, Al Zahir looked likely to defend his crown in the Emirates Championship, only to be passed just inside the final 200m by Rmmas who, himself, was almost immediately swamped by BF Mughader, who quickly opened up a decisive lead.

Rmmas tried to go after him, but could not, losing second close home to Abu Alabyad, who was flying home. Al Zahir crossed the line in fourth.

The winner completed doubles on the card for trainer Younis Al Kalbani and jockey Szczepan Mazur. Owned by Alwarith Ibrahim Al Hadhrami, the 6-year-old was winning for the first time since landing a 2000m handicap on the Al Ain dirt last January, having also won his previous outing, a handicap over this 2200m at Abu Dhabi.

Kalbani said: “We have enjoyed a good season, but this is very special for everybody involved.”

“He has always been a very good horse, but is not easy to ride because he needs everything to go right for him which, thankfully, it has today,” Mazur added.

“I am based with the trainer and this is a massive and biggest result for us, which is brilliant for the whole team.”

The Abu Dhabi Championship for Thoroughbreds was won in impressive style by GM Hopkins, giving the team of jockey Pat Cosgrave trainer Jaber Ramadhan another victory this season. Racing in mid-division, he progressed nicely under confident handling before leading about 300m from the finish, winning ultimately by a comfortable 1¼ lengths. Chasing him home were Ali Rashid Al Rayhi-trained Jaaref, followed by 2017 Godolphin Mile (G2) winner Second Summer, who was another length back in third. Top-rated Saltarin Dubai and Hermoso Mundo both disappointed in the field of nine.

“They went a very good gallop which has suited him,” Cosgrave, sporting the predominantly yellow silks of Ramadhan Stable, said. “Not much has gone right for this horse since he arrived in the UAE, but that strong pace was exactly what he wants and I am delighted for connections because they are only a small stable.”

Debutant Jabalini was impressive landing the opening 1200m maiden when finishing with a real flourish having been last of the main bunch of runners entering the relatively short run for home. Homebred by the Royal Cavalry of Oman, the 4-year-old was drawn widest of all in 14 and settled in 10th with just a quartet of stragglers behind him. Confidently ridden by Mazur, he was switched wide leaving the home turn and picked up in style, hitting the front at the 200m pole and storming clear. It was victory number 11 for Mazur this season, one fewer than winning trainer, Kalbani.

Again over 2200m, the Group 3 Arabian Triple Crown R2, restricted to 4-year-olds, provided Harrab, having his tenth career start after nine in his native France, the perfect opportunity to lose his maiden tag on his first outing for Mohamed Ali. Homebred by Deputy Prime Minister and Minister of Presidential Affairs Sheikh Mansour Bin Zayed Al Nahyan, he was ridden patiently by Richard Mullen, who was content to sit nearer last than first until edging closer as the leaders left the back straight.

Up front, Ebhaar was being stalked by stable companion RB Lam Tara, both trained by Eric Lemartinel, with the latter looking the likely winner when hitting the front with 350m remaining. However, winner of the 1600m first round, she seemingly failed to stay and had no response when challenged by Harrab passing the 200m pole, eventually finishing third with Margham Dubai staying on to snatch second.

Also over 2200m and limited to 4-year-olds, but those foaled locally, the UAE Arabian Derby carries Prestige status and was won somewhat cheekily by Octave who was produced by Gerald Avranche to grab the initiative with about 150m remaining. Trained by Abdallah Al Hammadi or Al Ajban Stables, the colt was shedding his maiden tag at the fifth attempt having chased home the impressive RB Lam Tara, over 1600m, in the Listed Arabian Triple Crown R1 on his previous outing.

Settled in midfield, he was into contention entering the home turn with Avranche content to bide his time behind Eghel de Pine and Hakeemat Muscat with the latter hitting the front 250m from home.

It took him until the finale, the Wathba Cup, a 1600m conditions contest for horses in private ownership, but Tadhg O’Shea was able to confirm his place in the UAE record books, partnering celebrating UAE victory 505, thus bettering Richard Hills’ 504, aboard AF La’Assae.

Retained this season by Khalid Khalifa Al Nabooda, it was his predominantly black silks he was sporting with the winner, like runner-up and stable companion, AF Motaghatres both homebred and trained by Ernst Oertel.

Having chased the early pace, O’Shea committed for home fully 700m out and found a very willing partner, who galloped on relentlessly to deny his stablemate, just as he had on his penultimate start, over 1400m, five weeks ago.