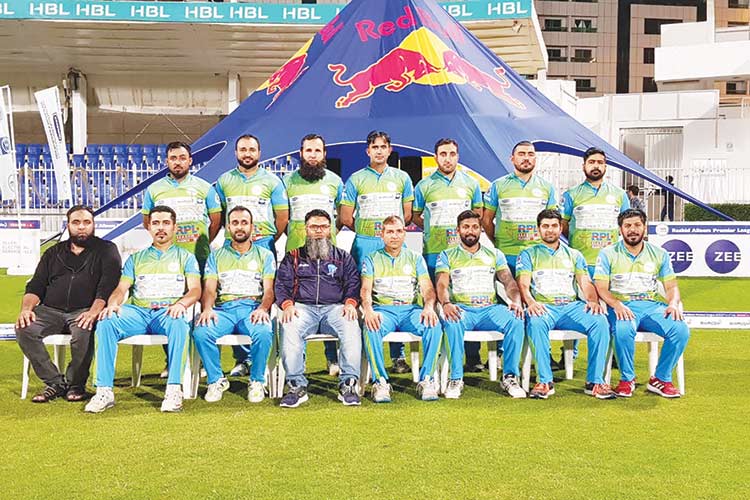 Dnata CC players pose prior to their RPL semi-final match against Geco IPL at the Sharjah Cricket Stadium on Thursday.

SHARJAH: Sewa defeated SIB Orange by 10 runs in a thrilling semi-final match of the Rashid Alleem Premier League (RPL) at the Sharjah Cricket Stadium on Thursday.

Batting first after calling the coin correctly, Sewa were all out for 152 in 19.4 overs. Sewa built their innings around Babar Ghazanfar (66) and Mohammed Waseem (26). Sewa were off to flying start as Hazrat Nabi hit quick-fire 20 off 24 balls studded with two boundaries.

On the other hand, Ghazanfar put SIB Orange bowlers to the sword. He smashed 66 off 50 balls including two boundaries and four towering sixes.

After the departure of Nabi and Ghazanfar, Sewa wicket-keeper Waseem kept the run rate going as he hit 26 during his brief stay at the wicket.

Later, none of their batsmen manage to reach double digit and Sewa ended the inning at 152 while losing all the wickets.

In reply, Jawad Abbasi and Hamza Jamsheed put 32 runs for the first wicket to give SIB Orange a decent start. Later, Nabil added 21 and Adeel score 14 to keep them in hunt. Nabeel Pulicharchi and Riaz Khaliq Kaku removed Nabil and Adeel respectively when the partnership looking dangerous.

In another semi-final, riding high on Muhammed Iqbal’s unbeaten knock of 75 runs Dnata CC defeated Geco IPL by eight wickets. Geco IPL posted 103 for the loss of nine wickets from 15 overs. Dnata CC’s Krishnachandran K and Naeem Khan shared three wickets each. Iqbal hit the bowlers all over the ground in his unbeaten 75 runs knock which came of 39 balls. He was well supported by Krishnachandran, who also scored unbeaten 23. Dnata CC reached the target in 12 overs while losing just two wickets.