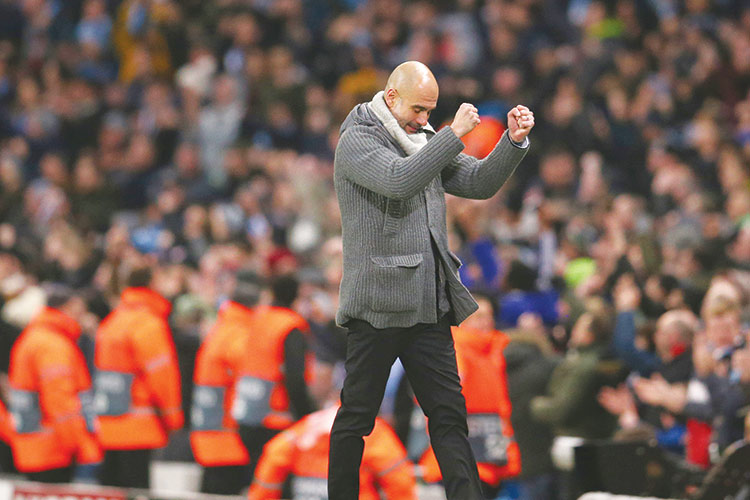 swansea : Pep Guardiola remains coy about Manchester City’s chances of winning the quadruple, but his side face Swansea in the FA Cup quarter-finals on Saturday standing just 16 games away from a clean sweep of all four major trophies.

Guardiola’s team moved closer to the unprecedented silverware haul on Tuesday as they advanced to the Champions League quarter-finals with a 7-0 demolition of Schalke in the last 16, second leg.

City have already won the League Cup, beating Chelsea in last month’s final, but that has not quenched Guardiola’s thirst for more success.

A victory at second-tier Swansea would see City move into the FA Cup semi-finals, with the Premier League title race set to go down to the wire.

City are one point clear of second-placed Liverpool and although the reigning champions would be knocked off top spot if the Reds win at Fulham on Sunday, they will have a game in hand.

In a bid to keep the pressure off his players, Guardiola has tried to talk down the possibility of City winning all four trophies, something that no team in the history of the English game has managed.

“I said so many times, and I know you are generous and thank you so much guys, but every time you make that comment we lose a competition, so I think you provoke me in that way so, the next one we will see,” joked Guardiola recently when asked about the prospect of a quadruple.

Swansea, currently mid-table in the Championship, are not expected to pose a major threat to City, but sterner tests lie in wait in what promises to a be a dramatic finale to the season.

The Champions League has provided some painful moments for Guardiola, who won the tournament twice as Barcelona boss but has not lifted the trophy since 2011.

Yet with English clubs constituting half of the eight teams in the Champions League quarter-finals, there are few opponents remaining who can intimidate City, especially with traditional powers such as Real Madrid and Bayern Munich having already exited the competition.

Even so, given the magnitude of the achievement City are chasing, the hype surrounding his team at present appears muted.

The last -- and, so far, only -- English club to win the treble of Premier League, FA Cup and Champions League was Manchester United under Alex Ferguson in 1999.

Guardiola himself achieved the equivalent in Spain with Barcelona in 2008-09.

Yet, Guardiola has done such a good job of playing down expectations in almost every scenario in which City have found themselves this season that the issue of a possible quadruple has barely been on the news agenda.

On the occasions that he has been asked about such a possibility, Guardiola has claimed that, to be considered among Europe’s elite, City first have to ensure they are regularly competing in the latter stages of the big competitions.

Meanwhile, Riding the crest of a wave after their superb victory over Bayern Munich, Liverpool have the perfect opportunity to edge back in front in a titanic Premier League title race at struggling Fulham on Sunday.

With leaders Manchester City continuing their audacious pursuit of a quadruple the previous day in the FA Cup quarter-final, Liverpool have the chance to sneak two points clear of Pep Guardiola’s side with victory at Craven Cottage.