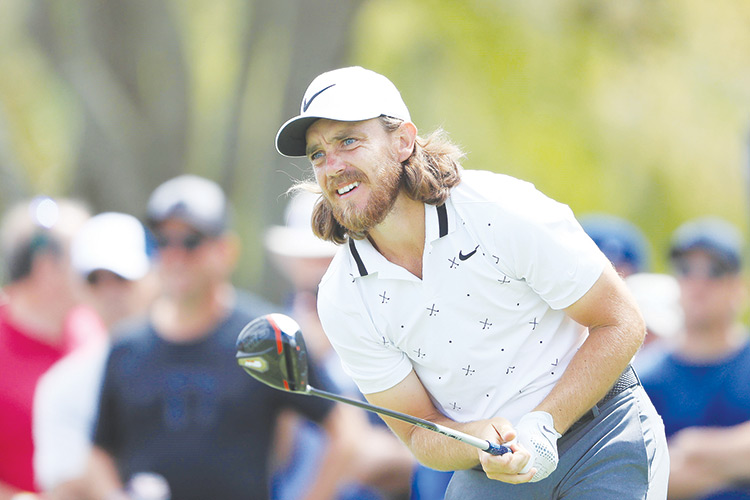 Tommy Fleetwood of England plays his shot from the ninth tee during the first round of The Players Championship on Thursday. Agence France-Presse

Miami: Britain’s Tommy Fleetwood fired a seven-under-par 65 to share the lead with American Keegan Bradley after Thursday’s opening round of the US PGA Players Championship with Rory McIlroy lurking two adrift.

Fleetwood’s bogey-free round at TPC Sawgrass included birdies on six of his last nine holes after starting at the 10th hole at the Ponte Vedra Beach layout.

“If I was going to pick a start, that would be it,” Fleetwood said. “I’ve done a good job of keeping myself in it.”

The 28-year-old Englishman was matched in the afternoon wave by 2011 PGA Championship winner Bradley, who had five birdies and an eagle in a nine-hole run.

“It was one of those rounds that just felt easy. It was a day where everything went right,” Bradley said. “I just felt really comfortable.”

Sharing third on 66 were South Korean An Byeong-hun and American Brian Harman with four-time major winner McIlroy of Northern Ireland and Americans Ryan Moore and Vaughn Taylor on 67.

Moore aced the par-3 17th hole with its famed island green on the fly, his fifth PGA hole-in-one.

Fleetwood, seventh at last year’s Players and third last week at Bay Hill, seeks his first US PGA title after four wins on the European Tour, the most recent of them last year defending a title at Abu Dhabi.

“It’s clearly the next step for me to win over here,” Fleetwood said. “But it’s not easy. I’ve got to keep plugging away and focusing on myself and hopefully that will come.

“I feel like I’ve been doing a lot of good things. Sometimes you need to just shoot some low scores. That seems like it’s coming. Just try and keep that going.”

McIlroy made five-foot birdie putts at 11 and 12 and sank a nine-footer on the famed 17th. He blasted out of a bunker to six feet to and birdied the second then hit an eight-footer to birdie the fifth.

After making changes last year to correct struggles, McIlroy feels on the right track with the Masters, and a chance to complete a Career Grand Slam, just a month away.

Former world number one Tiger Woods opened with a 70. The 14-time major winner birdied 16 and 17 but missed a four-footer for par to bogey 18.