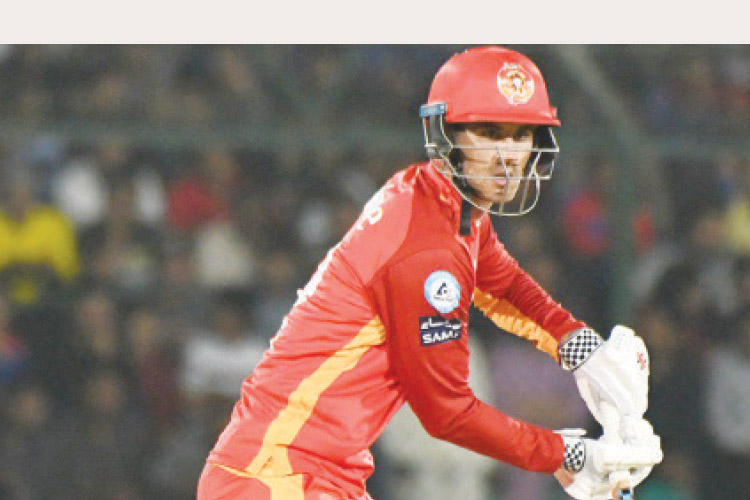 Islamabad United’s Alex Hales in action against Karachi Kings during their 1st Eliminator in Karachi on Thursday. Supplied

Karachi: Islamabad United beat Karachi Kings by 4 wickets in the 1st Eliminator at the National Stadium in Karachi on Thursday.

Islamabad, scored 164/6 in 19.3 overs in reply to Karachi’s 161/9 in their allotted 20 overs to set up a clash with  Peshawar Zalmi in Eliminator 2 on Friday, with the winner qualifying for the sell-out March 17 final against Quetta Gladiators.

Earlier, Karachi opted to bat first after having won the toss. They were given a swashbuckling start by their openers Colin Munro and Babar Azam. Munro’s cameo came in a flash with a run rate of 290.91 as he clobbered the Islamabad attack to all parts of the field, hitting 32 runs off only 11 deliveries with the help of 6 fours and a six. His partner Azam, who was bit more circumspect since Munro departed quickly, was the side’s top-scorer, amassing 42 runs off 32 balls with the help of four boundaries. Only Liam Livingstone (30 off 25) and Colin Ingram (23 off 16) managed to come up with decent contributions, and the Karachi in the end managed a total of 161/9 off their allotted 20 overs.

For Islamabad, Muhammad Musa was their most successful bowler, returning figures of 3/42 off his 4 overs.

Islamabad in their reply, lost a quick wicket, that of Luke Ronchi who was caught by Azam off the bowling of Aamer Yamin. Cameron Delport however dug in to hit a valuable 38 off 27 balls (4x4, 2x6) before being the second one to depart at the score of 63, claimed by Umer Khan, who had him caught by Azam. Chadwick Walton, who came in at the fall of Delport’s wicket got out first ball, caught by Dunk, again off Umer Khan’s bowling.

After Hales, who was his team’s top-scorer, got out, Islamabad looked to be falling short of victory. However, rapid fire cameos by Hussain Talat, who hit 32 off just 19 balls with the help of one four and three sixes, and Asif Ali who remained unbeaten on 20 off 10 balls with two sixes, took Islamabad past their target, with three balls to spare, when they scored 164/6.

For Karachi, Aamer Yamin and Umer Khan took 2 wickets each.