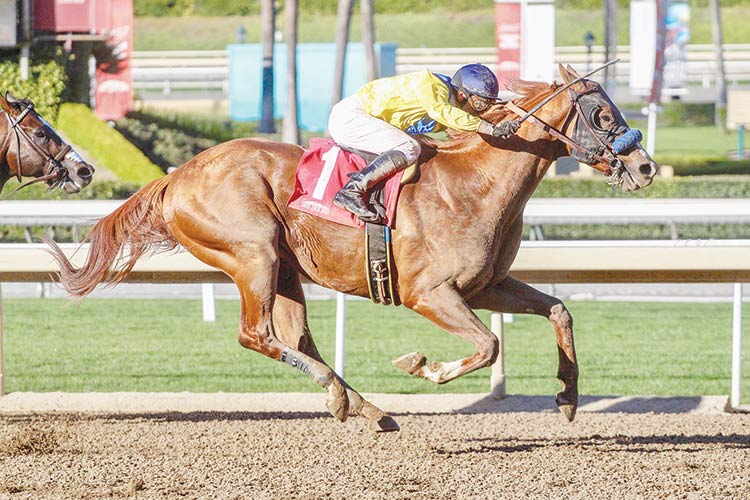 Dubai: The $12 million Dubai World Cup sponsored by Emirate Airline (G1) appears to have a nice balance of familiar faces and new players, in both equine and human form.

One such candidate who has arguably the most enviable connections of any is Dabster, whose trainer Bob Baffert has three victories in the 2000m race and was second last year with market favourite West Coast.

Owned by Sheikh Mohammed Bin Khalifa Al Maktoum, the son of Curlin carries the same yellow and blue silks as no less than three Dubai World Cup runner-ups—Mubtaahij, Lizard’s Desire and Asiatic Boy—the last of whom was coincidentally second to his sire in 2008.

The $1 million Fasig-Tipton purchase was nearly joined by stablemate McKinzie as Dubai-bound, but his conditioner decided against it after they worked on Sunday.

“Dabster is definitely going to the Dubai World Cup,” Baffert said. “McKinzie was on the fence. I think they’re going to re-card the (Santa Anita Handicap). Everything went really smooth (with the works). The track was in pristine shape.”

A consistent performer, Dabster is similar in style to another Baffert pupil who took home a nice chunk of the sizable pot a few years ago, Hoppertunity (third in 2016). Dabster, though, has even more to prove. He has not won a graded race, but has two stakes wins to his credit against lesser company. Facing stiff class in recent months, he has held his own, including a head loss to Breeders’ Cup winner Battle of Midway, who was expected to be one of the favourites in the Dubai World Cup before his untimely demise.

In 13 starts, the versatile charge has five victories and has proven effective from 1400m to 2800m, including a runner-up at the latter extreme in the Marathon (G2) last fall. Two starts ago, he was a fine third, between 1¼ lengths, in the San Antonio (G2) behind Gift Box and Battle of Midway. The former, trained by John Sadler, was being pointed to the Dubai World Cup until this week.

“He just needs more time,” Sadler said. “When I ship out, I ship to win, so I wasn’t going to go just to go. His training was interrupted by the weather, so, unfortunately, we won’t make it to Dubai.”

They were followed home by South Korean invader Dolkong, whose performance was doubly impressive, as it came only nine days after a romp in the Curlin Handicap (Listed) over the same 2000m. Still, all paths lead through the behemoth that is North America, who skipped Round 3—a race he dominated in 2018—to come into Mar. 30 a fresh horse. Fringe players who would likely hope to get into the big dance are New Trails and Gronkowski (both unplaced in Round 3), who ran fairly well, but must improve.