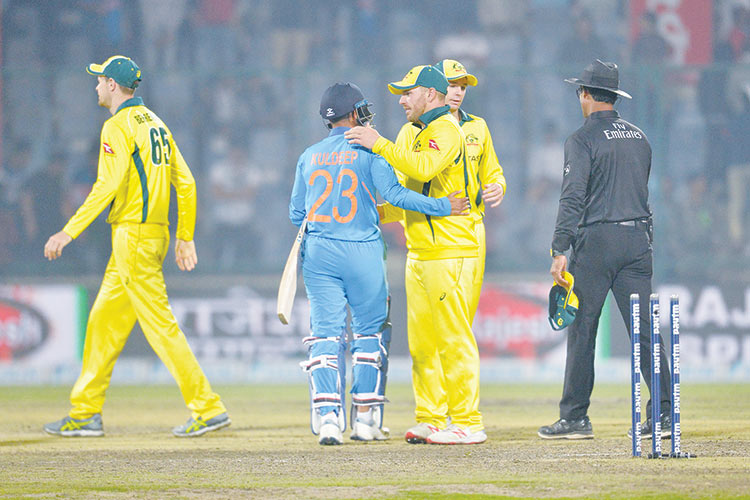 Despite missing banned batsmen Steve Smith and David Warner, Australia bounced back from a 0-2 deficit to clinch the series with a comfortable 35-run win in the final ODI in New Delhi on Wednesday.

It was Australia’s first ODI series win in India since 2009, when a Ricky Ponting-led side won a seven-match series 4-2, and follows humbling home Test and ODI series defeats against the same opposition.

“It’s unbelievable, the resilience and fight that we showed,” Finch said. “Being down 2-0 it would have been easy to roll over. Those small moments in the game, to just let them drift away and India win the series.

“But the fight that we showed, we’ve had our backs against the wall for quite a while now so I’m really proud of the group.”

Australian cricket has suffered a torrid year since Smith, Warner and Cameron Bancroft were banned for ball-tampering during a Test last March, an incident that prompted a national outcry.

Australia’s Test series defeat in December to January was their first to India on home soil, and they also went down 2-1 to the visitors in a three-match ODI series.

“People have written us off for quite a while now,” said Finch.

“We always knew that the plans and the style that we wanted to play are all there (and) can win us the World Cup,” he added.

Opener Usman Khawaja’s second century of the series guided Australia to 272 for nine on Wednesday, a total their bowlers defended by dismissing India for 237.

The left-handed batsman accumulated 383 runs in the five ODI games to top the series run chart ahead of India skipper Virat Kohli.

Khawaja, who was named man of the series, said it was a sweet revenge after the home ODIs defeat to India early this year.

Coach Justin Langer said he was “incredibly proud” of a team who also swept the two-match Twenty20 series.

“It is going to be tough to pick the World Cup squad,” Langer said.