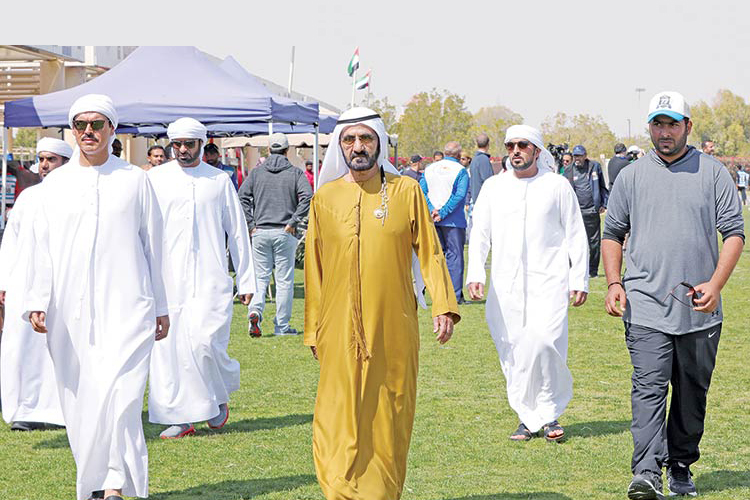 Dubai: His Highness Sheikh Mohammed Bin Rashid Al Maktoum, Vice President and Prime Minister of the UAE and Ruler of Dubai, attended the 119-km Al Yamamah Endurance Cup for Mares, which was held on Wednesday at Dubai International Endurance City.

Earlier, Sheikh Mohammed and Sheikh Hamdan attended Tuesday’s race from the beginning to the end.

The race saw the participation of 196 male and female equestrians. Abdullah Ghanem Al Marri from F3 Stables for Crown Prince of Dubai came in the first place astride Tiger Lily at 4,02,23 hours.

Meanwhile, racing at Meydan on Thursday, the final meeting on the course before the Dubai World Cup (DWC) in just over two weeks, is highlighted by a pair of Dhs190,000 handicaps, including a 1600m fixture in which the weights are headed by the Doug Watson-trained Thegreatcollection and Pillar of Society. All seven races on the CNN-sponsored night are on the Meydan dirt surface, with the traditional Thursday first race time of 6:30 p.m.

Thegreatcollection, a 5-year-old gelded son of Saint Anddan, has not won since November 2017, but is dropping in class here for what will be his sixth start of the season.

The most recent three of those were all 1600m handicaps at the Dubai World Cup Carnival. Fourth on his latest outing a fortnight ago, Thegreatcollection chased home Al Maktoum Challenge Round 3 (G1) winner Capezzano on both his previous starts. Regular partner Sam Hitchcott will be in the saddle again.

Stable jockey Pat Dobbs is aboard Pillar of Society, a course and distance winner at the first Meydan fixture of the season in November, but without a victory in five subsequent outings. The 5-year-old Roderic O’Connor gelding was second to George Villiers over course and distance 12 days ago, when caught near the finish.

“Both mine are in very good form and should run well,” Watson, who celebrated a Super Saturday double with Drafted and Muntazah, said.

“They also both have good draws and we know conditions suit them, so they should be thereabouts in a competitive race.”

The Watson pair face ten rivals in the 1600m CNN Travel handicap, including George Villiers for Satish Seemar and Richard Mullen, who will be primed to find the winner’s circle once more.

The 4-year-old Dubawi colt was having just his third UAE outing when victorious in the Mina Rashid Handicap and looks an exciting recruit for Seemar, being a half-brother to Hong Kong superstar Viva Pataca and Grade 1 dirt heroine Laughing. Seemar saddles three in the race, with Mullen sticking to George Villiers, Tadhg O’Shea choosing Mister Parma and Antonio Fresu picking up a nice spare ride aboard The New Maharaja.

Eleven have been declared for the CNN Business 1200m handicap, with Watson again saddling a pair of live hopes in top weight Almanaara and stable companion Lytham St Annes. Sporting the blue and white silks of His Highness Sheikh Hamdan bin Rashid Al Maktoum, 6-year-old Almanaara has the assistance of the owner’s retained jockey in Jim Crowley and is seeking a first win of the season in his fifth outing. A 1200m Meydan winner in March 2018, he will appreciate the cut back in trip, having faded near the finish when third over 1400m three weeks ago.

Lytham St Annes has been plying his trade at this level all season, winning twice over this distance last year. This will be his fourth outing of the season, following two disappointing efforts—over 1600m at Meydan and 1400m at Jebel Ali—and an improved run 12 days ago when fifth over this course and distance.

Watson said: “We were quite lucky with the draw in the 1600m race, but less so here, especially with Almanaara, who is quite wide in eight. He will need a bit of luck from there. Lytham St Annes was a bit flat for a couple of starts, but ran much better last time and, like Almanaara, is in great form at home.”

Seemar and Mullen provide one of the main dangers in the form of Beachcomber Bay, who will try to take to the front like Almanaara, but has a less than ideal draw for such tactics in barrier seven. A 4-year-old Invincible Spirit gelding, he won a 1200m Jebel Ali maiden in December and doubled his tally last out, six weeks ago at Meydan.