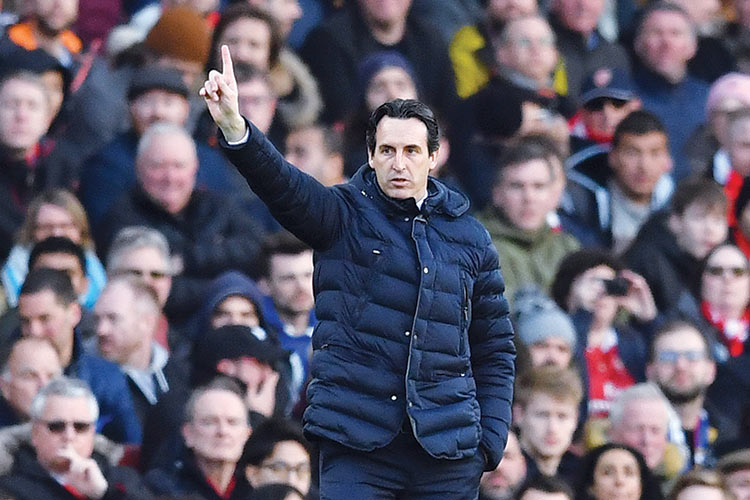 london: Unai Emery is not used to losing in the Europa League, but the Arsenal manager must summon a response from his team if they are to overturn a shock 3-1 defeat in the first leg of their last 16 tie with Rennes and remain in the hunt for a trophy in his first season with the Gunners.

Emery won three consecutive Europa League titles with Sevilla between 2014 and 2016 and winning the competition once more would guarantee Arsenal a much-needed return to the Champions League next season after a two-year absence.

A 2-0 win over Manchester United at the Emirates on Sunday was perfect preparation for the Gunners, who moved into the Premier League top four and sent a warning to Rennes over the stark contrast between their form at home and on the road ahead of Thursday’s clash at the Emirates Stadium.

Emery’s men have won 11 consecutive home games in the Premier League and Europa League since November, compared to three away wins in 12 matches on the road in the same period.

But for a first-half red card shown to Sokratis Papastathopoulos 40 minutes into the first leg, Arsenal could have been much better placed to progress to the last eight.

The visitors were leading 1-0 thanks to Alex Iwobi’s opener, but the Greek’s dismissal provoked a Rennes fightback and Emery is keen to ensure his side do not lose their heads chasing a comeback victory.

“We know that for example on Thursday one match can change a lot with one red card or goal, so controlling our emotions is very important,” said Emery.

Arsenal received a big boost on Tuesday with the news Alexandre Lacazette will be free to feature after his suspension for a red card against BATE Borisov in the last round was downgraded to a two-match ban, which has already been served.

Rennes boss Julien Stephan is all too aware of the firepower Arsenal contain in Lacazette and strike partner Pierre-Emerick Aubameyang and believes his side may need two away goals to progress.

“Arsenal remain favourites given their past and their experience,” said Stephan.

“The only thing I think is that we will need to score there, at least once, if not twice.”

In contrast to Arsenal’s struggles, Chelsea seem set to cruise into the quarter-finals after taking a 3-0 first leg lead over Dynamo Kiev.

Maurizio Sarri’s side are favourites to lift the Europa League in Baku on May 29 and there is a strong chance the Italian may meet his former club Napoli later in the competition as they also hold a 3-0 lead over Salzburg.

Sevilla have work to do if the Spanish side are to continue their incredible Europa League record as the five-time winners were held 2-2 at home by Slavia Prague last week.

However, La Liga should be represented in the last eight by Villarreal, who take a 3-1 lead over Zenit St Petersburg home for the second leg, while Valencia travel to Russia to face Krasnodar defending a 2-1 lead.