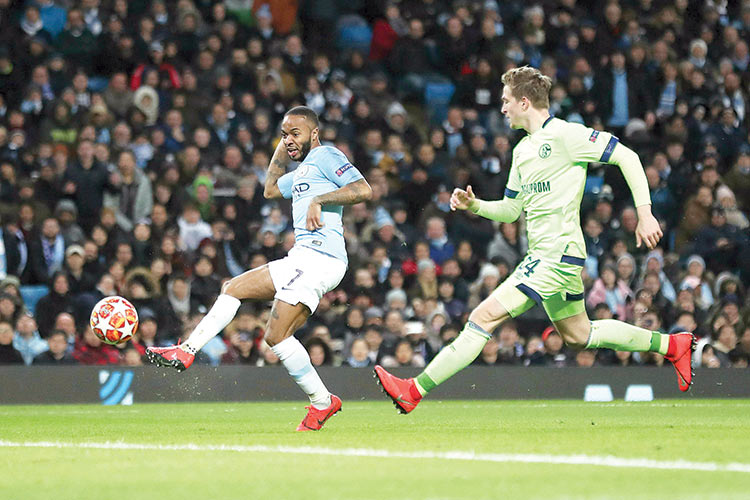 Pep Guardiola says Manchester City don’t fear any team in the Champions League after they powered into the quarter-finals with a 7-0 rout of hapless Schalke on Tuesday.

City had snatched two late goals to win the first leg 3-2 and they made the most of that fightback with a ruthless demolition job at the Etihad Stadium to clinch a 10-2 last-16 aggregate victory.

Guardiola’s side, who lifted the League Cup in February, remain on course for an unprecedented quadruple, sitting one point ahead of Liverpool at the top of the Premier League before this weekend’s FA Cup quarter-final at Swansea.

This emphatic victory was the joint-biggest ever Champions League knockout stage win but won’t linger long in the memory given Schalke’s total lack of resistence.

Twice a Champions League winner as Barcelona boss, Guardiola claimed this week that City are “teenagers” in the competition compared to the more established European powers.

They have never won the Champions League, with their best performance a semi-final appearance in 2016 under Guardiola’s predecessor Manuel Pellegrini.

But City are one of the favourites to claim the trophy after Real Madrid and Paris Saint Germain crashed out and, on this evidence, Guardiola’s players are up for the challenge of showing they are more mature than he believes.

Guardiola’s men monopolised possession and their territorial dominance finally paid off 10 minutes before the break.

Ilkay Gundogan clipped a pass into the Schalke penalty area and Jeffrey Bruma bundled over Bernardo, with the spot-kick awarded after being checked by VAR.

Aguero stepped up to nonchalantly chip the penalty down the middle as Ralf Fahrmann dived the wrong way.

That opened the floodgates as Aguero quickly put the result beyond doubt three minutes later.

Sterling was the provider as he raced onto Gundogan’s pass and pulled the ball back to Aguero, who squeezed his shot past Fahrmann from a tight angle for his 27th goal of the season.

An interminable VAR delay of several minutes while Sterling was confirmed as onside drew more boos from City fans.

But they were celebrating again in the 42nd minute.

This time it was Sane who ripped open the shambolic Schalke defence, the German winger sent clear on goal by Oleksandr Zinchenko before driving a clinical strike into the far corner.

City were streets ahead of Schalke in every phase of the game and Sterling maintained his sublime form with a cool finish from Sane’s majestic pass in the 56th minute.

Bernardo made it five in the 71st minute, netting with a first-time shot from Sane’s pass.

There was still time for Foden to bag his first Champions League goal as the young midfielder took Sane’s pass and slotted home in the 78th minute.

Meanwhile, Cristiano Ronaldo scored a spectacular hat-trick to fire Juventus into the Champions League quarter-finals with a 3-0 win over Atletico Madrid on Tuesday that saw his side claim a thrilling tie 3-2 on aggregate.

The Portuguese superstar scored two headers either side of half-time and a late penalty to clinch a place in Friday’s last-eight draw with a dominant display by the Italian champions in Turin.

Diego Simeone’s Atletico were a shadow of the team who had run riot in the first leg in Madrid, and crashed out of the tournament they had been hoping to win in their own Wanda Metropolitano Stadium on June 1.

It is the eighth time that Ronaldo has scored a hat-trick in the competition and mirrors his improbable treble which lifted former club Real Madrid past Wolfsburg in April 2016 with the Spaniards 2-0 down after the first leg.

The Champions League’s record scorer took his tally in the tournament to 124, with four goals this season.

Juventus signed 34-year-old Ronaldo last summer from Real Madrid for 100 million euros ($117 million) in order to make the difference on the continent for the Italian champions, who have not won the Champions League since 1996 and have finished runners-up twice in the past four seasons.