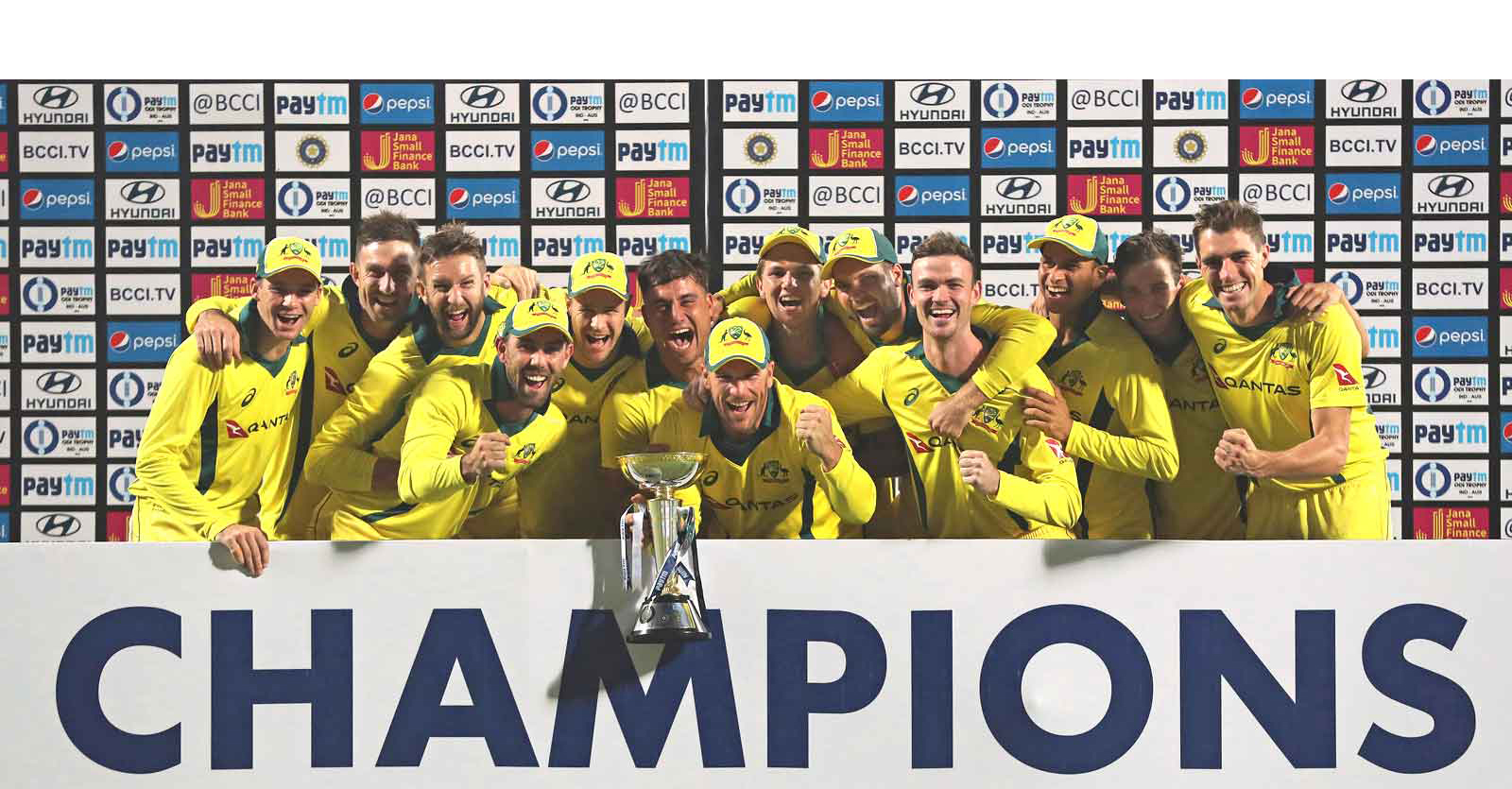 Australian cricketers pose with the winning trophy after winning the fifth one-day international cricket against India in New Delhi on Wednesday. Sajjad Hussain/AFP

NEW DELHI: Australia beat India by 35 runs to win the fifth and final One-Day International (ODI) on Wednesday and secure a 3-2 victory in the series.

It is the first ODI series' win for Australia since January 2017 and the fourth on Indian soil, the last coming in 2009. It was India's first loss in an ODI series at home since 2015 when they lost 3-2 to South Africa.

Usman Khawaja (100) struck his second century in three ODIs as Australia rode to 272-9. Peter Handscomb also followed his hundred in Mohali with 52 off 60 balls, as the duo put on 99 runs for the second wicket.

In reply, Rohit Sharma top-scored with 56 but India lost Shikhar Dhawan (12) and Virat Kohli (20) cheaply, which cost them the game. From 132-6 at one stage, Kedar Jadhav (44) and Bhuvneshwar Kumar (46) put on 91 runs for the seventh wicket but it wasn't enough to salvage the situation.

Opting to bat, Australia got off to another good start as Khawaja and Aaron Finch (27) put on 76 runs for the opening stand.

Ravindra Jadeja (2-45) was the pick of India's bowlers, and provided the breakthrough. But Khawaja and Handscomb denied the hosts any further opportunities. 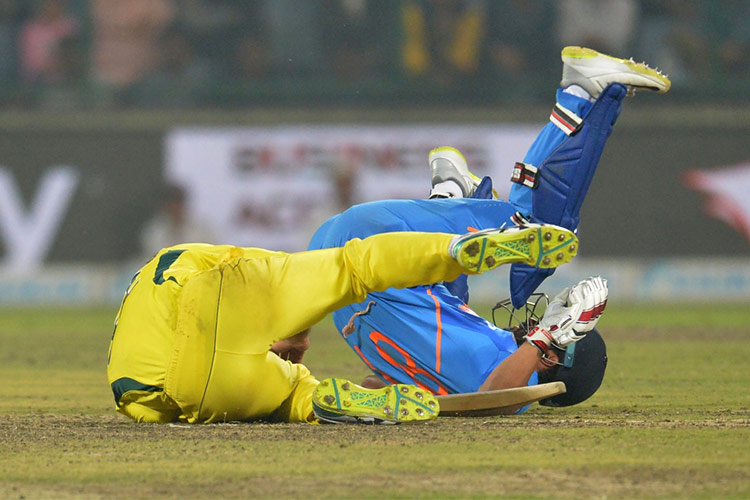 Kedar Jadhav (right) and Glenn Maxwell fall down on the ground during the fifth ODI cricket match in New Delhi. Sajjad Hussain/ AFP

Australia suffered a mini-collapse, though, and lost three wickets for seven runs in the space of 21 balls. Khawaja was out caught off Bhuvneshwar Kumar (3-48). Then Jadeja got rid of Glenn Maxwell (1) and Mohammed Shami dismissed Handscomb.

Marcus Stoinis (20), Ashton Turner (20) and Jhye Richardson (29) made important lower-order contributions to push Australia to a competitive total, which proved enough in the absence of dew.

Chasing 273, India lost Dhawan cheaply when the left-hander was caught behind off Pat Cummins (2-38).

Sharma and Kohli added 53 runs for the second wicket at quick pace. But the turning point came when Kohli played a rare poor shot to chase a wide delivery off Marcus Stoinis and was caught behind.

After scoring his 41st ODI half-century, Sharma was stumped off Adam Zampa (3-46), and the wrist spinner soon had Vijay Shankar (16) caught in the deep and then Ravindra Jadeja (0) was stumped three balls later.

From 132-6, India were in an impossible situation but Jadhav and Kumar focused on building a partnership. Their 50-stand came off 73 balls as India crossed 200 in the 43rd over.

Kumar hit two sixes and three fours, while Jadhav hit four fours and a six, as the duo looked to shift gears.

But when Jadhav was dismissed off Jhye Richardson, India wilted under the climbing asking rate.

This was India's final ODI before the 2019 World Cup. Australia next heads to the UAE and will take on Pakistan in a five-match series, both sides' last engagement before that summer tournament.