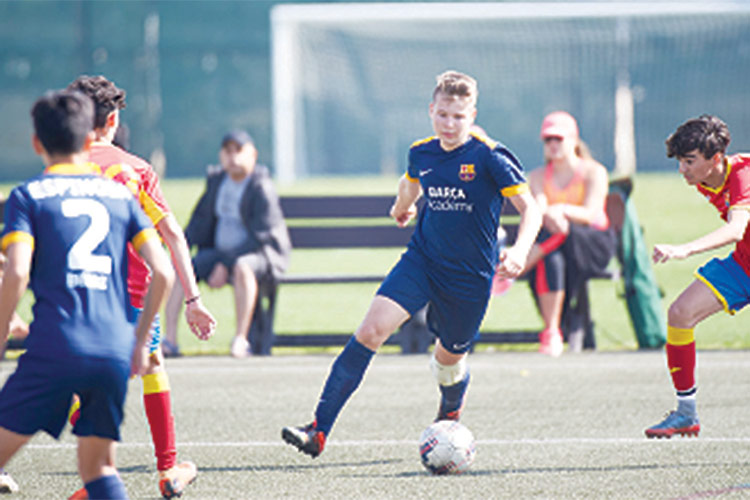 Action from a match between U-16 Barca Academy and Spanish Soccer Schools.

The win took du LaLiga HPC’s tally to 33 points from 11 games and they finished five points clear of City FC, who had one loss and a draw in their 11 matches. Al Nujoom were third with 25 points from eight wins, two defeats and a draw.

The other age categories have one more week to play in the Championship, which ends this coming weekend on March 16, 2019.

In last weekend’s U16 games, Al Wasl Club tied with Go Pro Academy 2-2, while du LaLiga HPC maintained their position at the top of Group A with a win over Shabab Al Ahli Dubai.

In the U14 Division, Barca Academy Guardiola defeated City FC 3-2, while FSC Foxes had to work hard for a close 1-0 win over Go Pro Academy. Al Wasl Club, however, had it easy, cruising to a 6-1 win over LaLiga Academy Villareal.

Next week in the U16 category, Al Wasl Club and Shabab Al Ahli Club will go head-to-head in their final match, while second-placed Dubai City FC Red will face-off against third-placed SSS Iniesta and leaders du LaLiga HPC will play FSC Foxes.

In the U14 category, top-placed SSS Iniesta will take on Talented FA and a win could see them winning the league title. City FC, who are only one point behind SSS Iniesta, will meet FSC Foxes, desperate for full points and hoping the result of SSS Iniesta’s match will fall in their favour.

The Dubai Sports Council Academies Championship is the largest tournament of its kind, expanded this year to include 100 teams and 2300 players from private and local club academies. The tournament, which kicked-off on October 20 last year, is played at the finest facilities in Dubai including Al Wasl Club, Shabab Al Ahli Club and Dubai Sports City Stadiums.