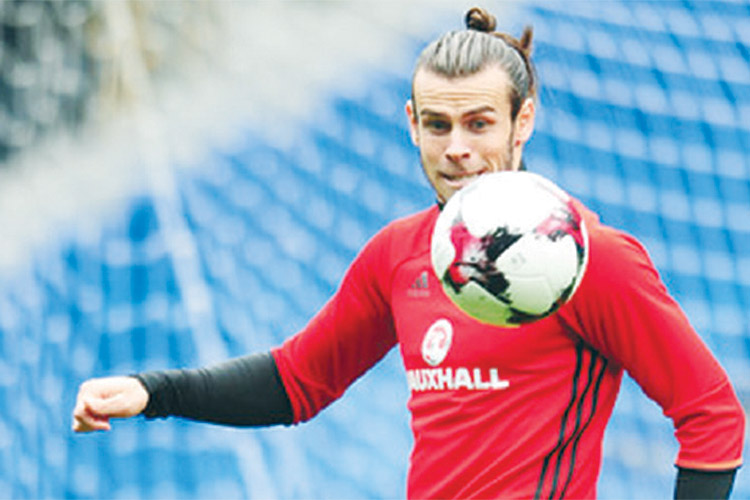 Gareth Bale has been jeered by supporters this season , with the Spanish giants enduring miserable campaigns in both domestic and European competition. Courtesy Twitter

Ryan Giggs has backed star man Gareth Bale to shine for Wales despite his problems at Real Madrid, where he has been targeted by disgruntled fans.

Bale has won four Champions League trophies in Spain but has been consistently relegated to the bench in recent weeks as Real’s season has unravelled.

Real were eliminated from the Champions League in the last 16 by Ajax Amsterdam after Barcelona knocked them out of the Copa del Rey. They are also 12 points adrift of leaders Barcelona in La Liga.

The 29-year-old’s limited integration into Spanish life has also drawn fire and Monday’s return of Zinedine Zidane as manager in place of the sacked Santiago Solari may also make the situation more difficult for Bale.

Bale and Zidane were barely speaking during the second half of last season and Bale is understood to be less than enthused by the Frenchman’s return.

A clean slate is possible but a parting of the ways appears more likely.

The Welshman is currently nursing an ankle injury suffered on Champions League duty but Wales boss Giggs is confident that he will have recovered in time to play in Wales’s opening Euro 2020 qualifier against Slovakia on March 24.

“He’s an experienced player. He’s a quality player and a quality person,” Giggs said after naming a 31-man squad for a Wrexham friendly with Trinidad and Tobago on March 20 and the Slovakia game in Cardiff.

“I expect Gareth to turn up and do what he always does, give everyone a lift. When he plays for Wales, he gives 100 per cent and more often than not he performs well.

“I don’t expect anything different because he’s always brilliant around the camp.”

Giggs said the forward has proved he is strong enough to handle any flak that comes his way.

“I played for (Manchester) United and you are open to criticism when you are at a big club,” Giggs said.

“Everyone has had it. The two Ronaldos had it out in Madrid, Gareth has had it.

The 83-times capped central defender, now 34 and on-loan at Stoke from Everton, has worn the Wales armband since 2012.

“He will be the captain as long as he is in the squad,” Giggs said.

Bale was included in a 31-man Wales squad for the friendly against Trinidad and Tobago on March 20, which comes four days before their opening match of the Euro 2020 qualifying campaign against Slovakia at Cardiff City Stadium. Bale has also been criticised for failing to learn Spanish and integrate with his Real team-mates but Giggs said the 29-year-old had the strength to rise above his problems at club level.

“It was the same when I played at United and you lost,” Giggs, who won 13 Premier League titles and made a record 963 appearances for the Manchester club, added.

“Great players over the years have put up with that at Real. There’s newspapers dedicated every day to reporting on that club. You have to take the rough with the smooth.”