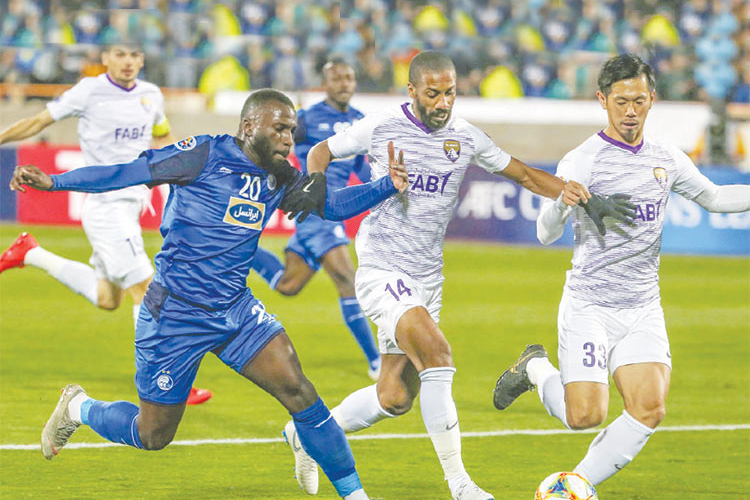 UAE’s Al Ain fought back to earn a late 1-1 draw against Islamic Republic of Iran’s Esteghlal at Azadi Stadium on Matchday Two of the 2019 AFC Champions League Group C on Tuesday.

A cautious start to the game saw both sides limited to shy attempts in the opening 20 minutes. Al Ain’s Rayan Yaslam tried his luck on the half-volley from outside the box, but Mehdi Rahmati easily saved, and Bandar Mohamed sent his effort from the free-kick wide and high.

At the other end of the pitch Mohamed Fayez threw his body to block Farshid Bagheri’s shot in the 23rd minute, which was headed goalward with Al Ain goalkeeper Khaled Eisa fallen on the ground having punched away the cross.

The crowd at Azadi Stadium then breathed a sigh of relief at the sight of Jamal Maroof’s drilled shot bouncing off the upright in the 28th minute.

The forward, starting in place of the injured Caio Fernandes, cut inside from the left and beat the Esteghlal goalkeeper at his near post, but the woodwork interfered to keep the scores level.

Four minutes later, it was the hosts’ turn to be denied by the frame of the goal. Esmael Goncalves rose highest to head Ayanda Patosi’s cross from the corner, but his header ricocheted off the crossbar and the two teams went into the dressing rooms level.

Al Ain started the second half on the front foot, and again the woodwork played its part in keeping the game goalless.

Just two minutes after the restart, Mohammed Khalfan exchanged a one-two with Amer Abdulrahman from the corner and the former advanced deep into the penalty box before hitting the crossbar with a left-footed effort.

Farshid Esmaeili showed what he is capable of, going on a slaloming run from the right to skip past three defenders and try to finish from a narrow angle, but Khaled Eisa made an athletic save at the near post to tip it behind for the corner.

In the 53rd minute set-piece would finally break the deadlock. Patosi’s out-swinging cross was nodded home by Bagheri to the joy of the home fans as Esteghlal took the lead.

The hosts controlled the rhythm of play for the bulk of the second half and could have added a second goal in the 76th minute.

Substitute Humam Tareq went on a jinking run down the middle and tested Eisa from range. The Emirati goalkeeper produced a top drawer save to deny Tareq and keep the margin at just one goal.

Marat Bikmaev’s second-half free-kick proved to be the difference as Pakhtakor of Uzbekistan defeated Saudi Arabia’s Al Ahli 1-0 in a Group D clash on Tuesday, earning the first win of their 2019 AFC Champions League campaign.

While Al Ahli came into the game on the back of an opening day 2-0 win at home over Al Sadd, Pakhtakor had only one point in their tally following a 1-1 draw with Persepolis in Tehran.

Hosts Pakhtakor started the first half strongly and Bikmaev had a great opportunity to put his side ahead in the 18th minute but his shot failed to trouble Al Ahli keeper Mohammed Al Owais. That would be the story of the first half, with Pakhtakor carving up a number of chances, only to be let down by their finishing.

Pakhtakor finally broke the deadlock in the 62nd minute, after Bikamev drilled in a free-kick past Al Owais, following a foul by Hussain Al Moqahwi.

The goal seemed to inject a sense of urgency into Al Ahli, whose talismanic striker Omar Al Somah had been kept quiet until then. The Syrian had a go at goal in the 64th minute with a stinging low strike, but saw his effort go wide.

In the 78th minute, Pakhtakor almost got a second goal and it was Bikmaev once again who was involved, getting on the end of Jaloliddin Masharipov’s aerial ball, but Al Owais kept the ball out with a point-blank save.