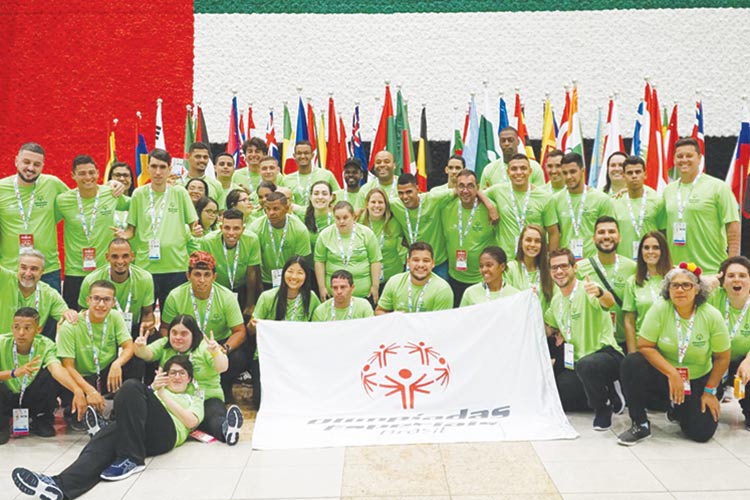 The Brazilian Special Olympics team is being sponsored by Mubadala.

The anthem, titled Right Where I’m Supposed To Be, will be revealed for the first time at the Opening Ceremony of the World Games where global superstar Avril Lavigne, whose song ‘Fly’ was the official anthem for the 2015 World Games, and Luis Fonsi, singer of global smash-hit single ‘Despacito’, will be among the personalities performing the song.

Joining them on the stage in front of more than 40,000 fans at Zayed Sports City Stadium to sing the anthem will be three Arabic music stars including Emirati singer and Good Will Ambassador at Large Hussain Al Jassmi, Syrian superstar Assala Nasri, and Star of Egypt and the Arab World, Tamer Hosny.

The anthem was given the seal of approval by Honorary Executive Producer and 28-time Grammy award winner, Quincy Jones, who also composed the song, ‘I know I can’, for the 2007 World Games in Shanghai.

Ryan Tedder and Greg Wells are proud to have written such a powerful song that promotes inclusion and motivate the athletes during the World Games.

Greg Wells said: “I love the fact that Special Olympics is taking place in Abu Dhabi, where East and West will be united. We want to unite the whole universe on this path.

“The power that music has with a great song and message can not only cross fake lines on the map but ideological differences.”

“We have spent a lot of time on the lyrics and the track as we wanted it to be uplifting and inspiring without being too preachy,” said Ryan Tedder.

“This is the kind of stuff I would want to hear, sitting in a stadium full of people. Fingers crossed that everyone will like it.”

The anthem will be played throughout Special Olympics World Games Abu Dhabi 2019, which takes place from March 14-21. More than 7,500 athletes from over 190 nations are set to compete in 24 Olympic-style sports in Abu Dhabi and Dubai, in what will be the largest sports and humanitarian event of the year.

Having been active in Brazil since 2011 through a number of major investments, Mubadala took the opportunity to sponsor the 51 members of the Brazilian Special Olympics team.

Meanwhile, a total of 110 Chinese athletes departed to Abu Dhabi, to attend the largest sporting event ever held for sportsmen and women with intellectual disabilities. Competing in a broad range of sport, the team will participate in Track and Field, Swimming, Table Tennis, Badminton, Football, Basketball, Weight Lifting, Gymnastics and Bowling.