UAE come from behind to beat Lebanon, go top of Group B - GulfToday

UAE come from behind to beat Lebanon, go top of Group B 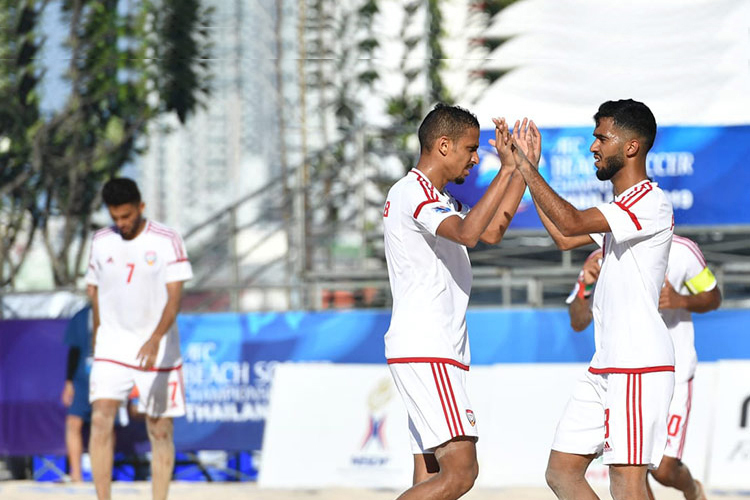 Pattaya: The UAE emerged as Group B winners, recovering from two goals down to beat Lebanon 3-2 at the AFC Beach Soccer Championship Thailand 2019 on Monday.

Both sides had already guaranteed progression the last eight prior to the match, but UAE’s win means head coach Mohamed Almaazmi’s pre-tournament goal of winning the title without defeat remains a possibility.

UAE and Lebanon will discover their quarter-final opponents following the conclusion of the two Group A matches to be held later tonight.

Eager to claim top spot in Group B, UAE began with a flourish and remained in possession for the majority of the opening period, but Lebanon goalkeeper Hussein Salame made saves to deny several goal-bound Emirati efforts.

Despite the UAE’s early intent, it was Lebanon who opened the scoring –– against the run of play –– when Hussein Abdullah beat Mohamed Al Bahri with his fifth goal of the tournament in the sixth minute, and they were two ahead when Abbas Zein El Dine steered home a long range effort to punish a sloppy turnover five minutes later.

UAE, finalists two years ago, immediately bounced back when Waleed Beshr scored a superb volley after a rehearsed move from the kick-off, and they were level a minute into the second period as Hesham Al Muntaser bounced a free-kick over Salame’s arms and into the net.

Salame’s afternoon came to a premature end when he was shown the red card for bringing down Ahmed Beshr, but although Mohamed Choker saved the subsequent kick, the Emiratis still went ahead for the first time, when Waleed Besher scored on the stroke of 20 minutes.

Lebanon spurned a fantastic chance to draw level when Hassan Kadi crashed a penalty kick into the crossbar after being brought down by Humaid Jamal in the 27th minute, and misfired from multiple late free-kick opportunities for the UAE to record an important win.

Kamal Ali left the pitch with six minutes remaining nursing an injured shoulder, but that was the only sour note for a UAE side who extended their perfect group stage to three wins from three.

Mohamed Almaazmi, UAE head coach, said: “I would like to thank my players for this game. We take another three points and an important three points, to top the group.

“It was a hard and tough match. The Lebanon team is a good team. Never mind who we play next. If you want to be champions, you have to beat everybody.”