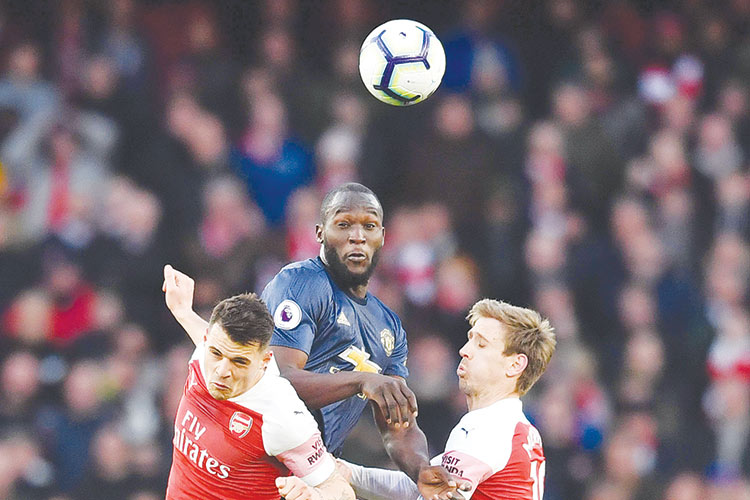 Lingard infuriated Arsenal’s players when he launched into a ‘moon-walk’ in front of the home supporters to mark his goal in United’s 3-1 FA Cup fourth-round win at the Emirates Stadium in January.

The United winger’s flamboyant celebration was perceived as taunting and Arsenal were determined to get their own back when Ole Gunner Solskjaer’s side returned to north London on Sunday.

Lingard, who also scored twice in the league clash at Arsenal last season, irked fans by posting his recent celebration on Instagram with the location set as “dancefloor”.

But Granit Xhaka’s opener and Pierre-Emerick Aubameyang’s penalty gave Arsenal the 2-0 win they craved at the weekend, ending Solskjaer’s unbeaten domestic streak since taking charge at Old Trafford in December.

Making it even sweeter, Arsenal climbed above United into fourth place in the race to qualify for next season’s Champions League.

For most games this season when forwards and Pierre-Emerick Aubameyang have started together the latter has been played out of position on the flank.

Such a ploy has been successful, with Aubameyang’s 17 league goals bettered only by Liverpool’s Mohamed Salah this term, but usually it has been one or the other playing as a lone striker.

Lingard missed the game as he nurses a hamstring injury but Leno admitted the England star’s antics had spurred on Unai Emery’s team.

“In your mind you will never forget something like that, when somebody is celebrating,” Leno said.

“You don’t want to see it again so we were motivated and we knew before the game about our chance because Man United had one more point than us.

“Now we have a two-point lead and that was enough motivation for us. We are in the top four and the other teams now wait for our mistakes.”

“We don’t play against the other top six teams so I think we can beat the others,” the goalkeeper added. “The next game is against Newcastle at home and it is an opportunity to win and stay in the top four.”

Emery praised his team after finding the winning formula against visitors United.

“It is important to play a different system, different players and keep the same performance,” he told reporters. “I think we’re improving, we’re feeling better with big confidence.

“I don’t know if it is the best performance this season, we are improving. We are being competitive in different matches. “We are being consistent and that is very important.”

On another day, United would have extended their fine record against Arsenal — three defeats in their previous 17 games in all competitions — having hit the bar and post in the first half, while having more shots on target than the hosts.

Arsenal ensured a defence that has conceded just three goals in their last eight away games in all competitions had an uncomfortable afternoon and they can start to aim higher after leapfrogging United in the table.

The celebrating Arsenal fans were keen at fulltime to warn Tottenham, “We are coming for you”, given their team now trail Spurs by one point, having been 10 points adrift last month.

Since Arsenal have none of the top six left to play this season, while two of Tottenham’s next four league opponents are second-placed Liverpool and leaders Manchester City, both away from home, the supporters’ confidence is not without foundation.