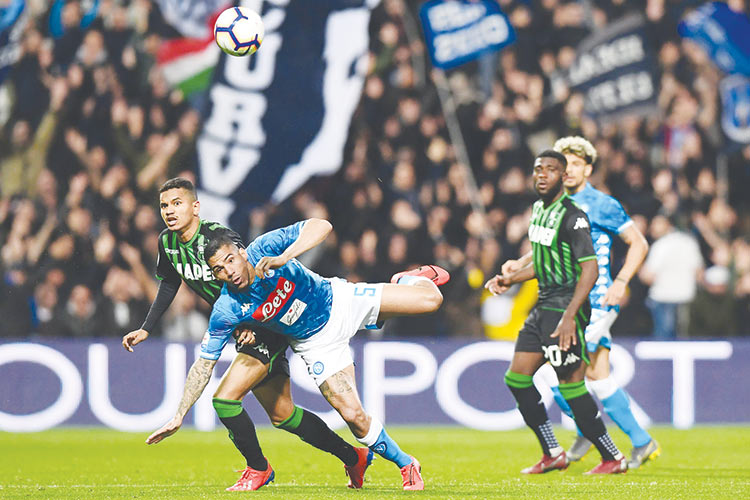 Napoli’s Allan (left) vies for the ball with Sassuolo’s Rogerio during their Italian League match on Sunday. Agence France-Presse

Milan: Lorenzo Insigne netted a late equaliser for Napoli in a frustrating 1-1 stalemate at Sassuolo on Sunday to leave Carlo Ancelotti’s side trailing league leaders Juventus by 18 points as Serie A rivals Inter Milan warmed up for next weekend’s derby against AC Milan with a 2-0 win at home to SPAL.

Napoli’s hopes of a first league title since 1990 have faded as Juventus continued their charge towards an eighth consecutive Scudetto with a 4-1 win over Udinese on Friday.

Napoli are far behind in second, six points ahead of AC Milan, who beat bottom club Chievo 2-1 on Saturday for a fifth league win in a row.

Inter Milan are a further point adrift in fourth.

“We did well to react and get a draw out of it, then tried to push for the victory,” said Insigne.

“Now let’s think about Salzburg,” he added of their Europa League tie during the week where they can advance to the quarter-finals.

Inter meanwhile shook off pre-derby tensions with Matteo Politano and Roberto Gagliardini scoring in the second half to beat Spal 2-0 to revive their Champions League chase.

Lazio, with a game in hand, are two points off the Europa league places after a 1-1 draw at Fiorentina, with Ciro Immobile’s 23rd minute goal cancelled out by Luis Muriel (61) for the hosts who are 10th.

Torino continued their impressive form with Andrea Belotti claiming a double to extend their winning run to three games with a 2-1 win at Frosinone.

Walter Mazzarri’s side move sixth and into the Europa League places, level on 44 points with Roma, who play at Empoli on Monday under new coach Claudio Ranieri, and Atalanta who beat Sampdoria 2-1.

Colombian Duvan Zapata broke through for the Bergamo outfit on 50 minutes and Robin Gosens scored the winner after 77 minutes.