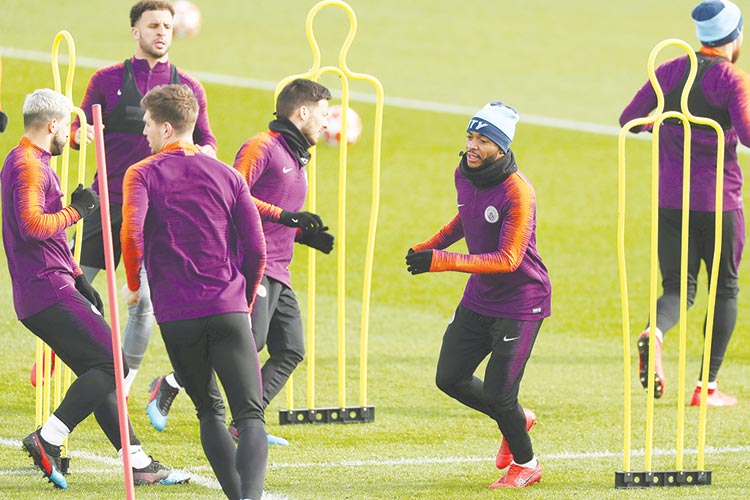 Manchester City players during training at their Etihad Campus in Manchester on Monday. Reuters

Juventus’s Champions League hopes are hanging on Cristiano Ronaldo pulling off another sensational comeback as the Italians trail 2-0 to defensive specialists Atletico Madrid going into the last 16, second-leg tie in Turin on Tuesday.

“We didn’t expect to lose the first leg 2-0, but anything can happen, and we want to give a great response in our home, in front of our fans,” Ronaldo told Juventus TV ahead of the game in the Allianz Stadium.

“These are the great nights, the fantastic ones: the Champions League nights,” he continued.

“The team is confident of playing a great game and I am too. To the fans I say: think positive, let’s believe.

Expectations are high that he can reproduce his improbable hat-trick which lifted Real Madrid past Wolfsburg in April 2016 with the Spaniards 2-0 down to the Germans after the first leg.

Juventus have come from behind in the elite European competition eight times -- including in the 1996 quarter-finals against Real Madrid on their way to winning the title.

They also lifted the European trophy in 1985, but have finished runners-up five times since their last success, including twice in the past four years.

City needed late goals from Leroy Sane and Raheem Sterling to win the first leg 3-2 in Gelsenkirchen three weeks ago when the Germans shrugged off dreadful league form to produce a battling display.

However, Schalke’s fortunes have nose-dived since, leaking 11 goals in three heavy defeats to leave them four points from the Bundesliga relegation places.

Tedesco, 33, has been told he has two games to prove himself.

Schalke’s new sporting director Jochen Schneider says only good performances at City and home to third-placed RB Leipzig next Saturday can save Tedesco.

Man City have won their last nine games at the Etihad Stadium, but the Schalke squad are hoping for an unlikely away victory and want Tedesco to stay on.

Morale in the Schalke squad is so low after Friday’s defeat that all the talk was on avoiding relegation, with the prospect of facing the Premier League leaders in their own backyard barely registering.

“This is not a pleasure trip,” says Schneider.

“The anticipation is overshadowed by the situation in the Bundesliga.”

Defeat in Bremen came on the back of last weekend’s 4-0 thumping at home to Fortuna Duesseldorf and a 3-0 defeat at Mainz - three losses against mediocre mid-table opposition.

Guardiola, meanwhile, has again cast doubt on the Premier League champions’ readiness to win the Champions League for the first time despite being favourites for the competition.

City host Bundesliga strugglers Schalke on Tuesday with a 3-2 first leg lead in their last 16 tie hoping to avoid the pitfalls that did for Paris Saint-Germain and Real Madrid in Champions League shocks last week.

Guardiola admitted even he was taken aback by Manchester United’s stunning 3-1 win in Paris and holders Madrid’s capitulation to a talented young Ajax team, but refuted suggestions their elimination had cleared the way for City to finally conquer Europe.

“We are teenagers in this competition that’s my feeling. It’s not excuses, of course we want to win it,” said the Catalan coach on Monday.

“You have to dream and point as high as possible but in the same time you have to accept there are other teams thinking the same with a lot of quality and lot of talent.”

Manchester City’s Vincent Kompany has hailed teammate Raheem Sterling as one of the best players in the world after his 13-minute hat-trick in the 3-1 win against Watford.

“It’s incredible because his first year at City was tough, and then from the moment Pep (Guardiola) came in he just kicked on and went from strength to strength,” said City captain Kompany.

“For me, he is one of the best wingers in the world. He’s so important for us. To have the ability to unlock defences when they defend with so many bodies is the sign of a top, top, top player.”

City boss Guardiola was more measured in his praise for Sterling, 24, who has now scored 20 goals for club and country this season.

“He scored three goals, we’re delighted, but he can do better,” said Guardiola.