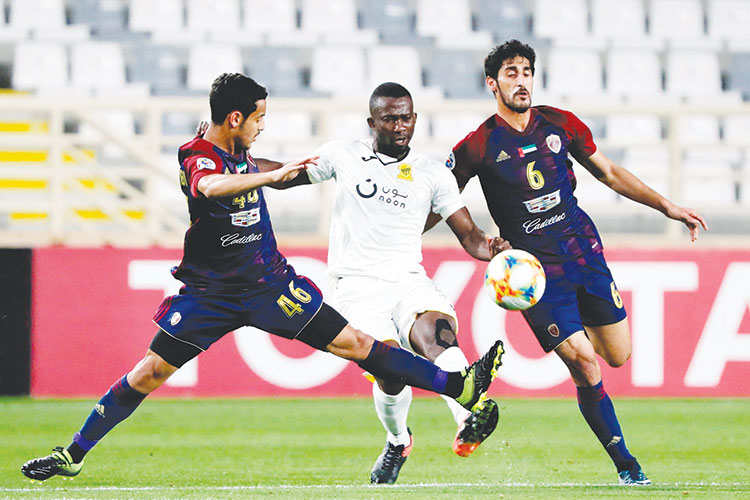 Al Ittihad and Al Wahda’s players vie for the ball during the ACL match on Monday.

ABU DHABI : A brace from Leonardo ended a three-match winless run for Al Wahda in the AFC Champions League in style after they defeated Saudi Arabia’s Al Ittihad 4-1 at Al Nahyan Stadium on Matchday Two of Group B on Monday.

The hosts took the game to their opponents’ half from the start and Leonardo was a constant nuisance for the Ittihad defence as he repeatedly tried his luck from outside the box in the opening quarter of an hour.

The Clarets took the lead 16 minutes into the game following a lapse of concentration from Ittihad captain Ahmed Asiri.

The defender looked to bring the ball forward past the halfway line but was dispossessed by Sebastian Tagliabue who then advanced into the Ittihad penalty box and squared for Mohammed Al Menhali to tap in from point-blank.

At the other end of the pitch, Ittihad’s only big chance of the first half was Fahad Al Muwallad’s sliding effort in an attempt to take Khaled Al Samiri’s cross first-time. The Saudi international’s attempt ended on the wrong side of the post.

The second half started in a similar fashion with the hosts dominating possession and looking to carve openings in the Ittihad defence.

Al Wahda’s second goal indeed came in a nearly identical way to their first. Tagliabue applied pressure deep into the opposition half, but this time it was midfielder Sekou Sanogo who was dispossessed.

Tagliabue then supplied the pass to Leonardo who curled from the edge of the box past the helpless Fawaz Al Qarni to make it 2-0 seven minutes after the restart.

Veteran striker Nassir Al Shamrani halved the deficit for the visitors with his 30th AFC Champions League goal. The 2014 AFC Footballer of the Year has now scored with four different teams in the competition, having previously found the back of the net with Al Shabab, Al Hilal and Al Ain.

Al Shamrani is unlikely to score any easier than his 56th minute goal. The 35-year-old took advantage of a defensive mix-up to tap in from three yards.

The crowd at Al Nahyan Stadium thought their team had put the tie beyond doubt at the hour-mark when Tagliabue snatched the ball inside the box and beat goalkeeper Al Qarni, but the Argentine and the Al Wahda faithful watched in agony as the ball bounced off the upright and out for a goal kick.

The goal did finally come in the 80th minute. It was veteran Ismael Matar who came off the bench to seal the win.

The UAE international curled into the top corner from a free-kick just outside the penalty box to make it 3-1 and confirm Al Wahda’s first win in four AFC Champions League matches.

An added-time goal from Leonardo put the icing on the cake for the Emirati side as the Brazilian slotted home Khalil Ibrahim’s delicious backheeled pass after Al Qarni had spilled Tagliabue’s powerful shot.

Al Wahda travel to Qatar to face Al Rayyan on April 9, while Ittihad welcome PFC Lokomotiv to the King Abdullah Sport City in Jeddah on the same day on Matchday Three.

Elsewhere, Alaa Abbas bagged a brace as Al Zawraa marked the first-ever AFC Champions League match to be played in Iraq with a thumping 5-0 victory over Al Wasl in matchday two of Group A on Monday.

Backed by a capacity crowd at Karbala Sport City Stadium, Al Zawraa started on the front foot as Abbas tested Al Wasl goalkeeper Humaid Abdulla from range 17 minutes in, but the Emirati goalkeeper tipped the shot behind for a corner.

The home crowd were sent into raptures as Al Zawraa skipper Samal Saeed fired home the opening goal halfway through the opening period.