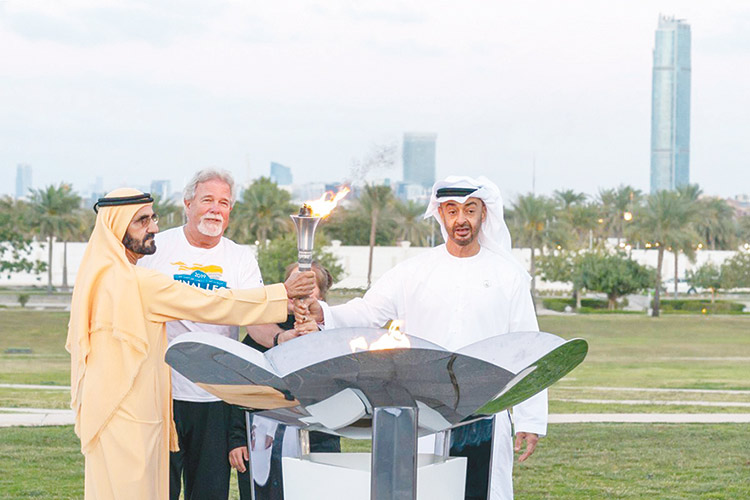 His Highness Sheikh Mohammed Bin Rashid Al Maktoum, Vice President and Prime Minister of the UAE and Ruler of Dubai, affirmed that the UAE was founded on the principles of empowering people of determination and made great strides in speeding up their integration and creating opportunities for them to become active members in the UAE process of development.

Sheikh Mohammed said so during his participation with His Highness Sheikh Mohamed Bin Zayed Al Nahyan, Crown Prince of Abu Dhabi and Deputy Supreme Commander of the UAE Armed Forces, in the ‘People of Determination Retreat’ held on Sunday at the Presidential Palace in Abu Dhabi concurrently with the Special Olympics World Games Abu Dhabi 2019 hosted in the UAE.

During the function, Sheikh Mohammed said that he and Sheikh Mohamed Bin Zayed signed the People of Determination Retreat Document, received the Flame of Hope torch as part of the preparations for the Special Olympics and announced initiatives to enhance the integration and empowerment of this category of people.

The retreat was attended by the people of determination themselves, enabling them to come out with ideas and initiatives that would be implemented by themselves, Sheikh Mohammed said, adding that they would be supported by all government entities and institutions.

The retreat came as part of the efforts to empower people of determination and support them in all national programmes and sectors. It had 8 themes: sports, quality of life, education and employment, international representation, health, culture, services and media.

Meanwhile, Sheikh Mohamed Bin Zayed said the Special Olympics is more than just a world-class sporting event and should be dealt with as an incentive for making more steps to integrate people of determination in the society, in the region and the world at large.

“We have great confidence in people of determination who inspire us to have a strong will and be perseverant for achieving more successes and national milestones”, he said.

It was announced at the end of retreat that more than 31 initiatives and national programmes were approved for supporting the future of the people of determination and enable them to interact in all sectors.

Entertaining day: Sharjah guests enjoyed a rich cultural and entertaining day at the Heritage Village as part of the Host Town program Sharjah.

Through the program, Sharjah is hosting 24 delegations of teams participating in the Special Olympics World Games Abu Dhabi.

At the Heritage Village, the guests where received by a number of governmental officials headed by Dr Tariq Sultan Bin Khadem, Chairman of the local executive committee of the Emirate of Sharjah for the program.

Attendees enjoyed being introduced to the authentic Emirati culture and heritage where they listened to the folklore tales and learnt about the agricultural and seamanship practices of old Emirati people.

The latter was especially appreciated by female attendees who had their hands covered with colourful henna drawings by the Emirati senior women of the village.

The Local Organising Committee (LOC), of Special Olympics World Games Abu Dhabi 2019, in partnership with the UAE Ministry of Community Development and Host Town committees of each emirate, is hosting the world from March 8 - 11.

The World Games’ Host Town program will be the largest cultural exchange program in the Middle East and North Africa. It will see almost 11,000 athletes and coaches from over 190 nations hosted across all seven emirates. It is the first milestone for the delegations and athletes upon arriving in the UAE for the World Games where they experience the rich culture and history of the UAE ahead of their participation in the Games.