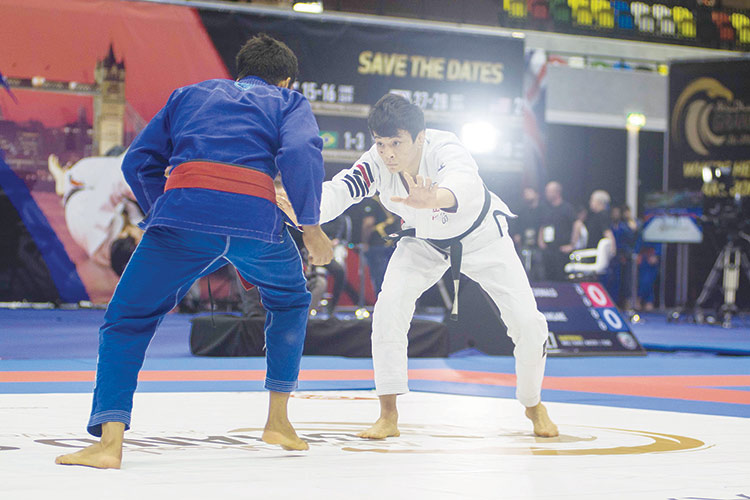 Paulo Miyao and Isaac Doederlein in action during their bout in London on Saturday.

Abu Dhabi: Abu Dhabi Grand Slam® Jiu-Jitsu World Tour fifth and final leg Day 1 began in London on Saturday at the Copper Box Arena, where some of the worlds best black belts’ entertained the local British fans with a display of the highest level of jiu-jitsu.

In the much-anticipated match between Paulo Miyao and Isaac Doederlein in the Adult 69kg finals, Miyao won via 4-2 points decision after a tough fight and Brazil’s Thamara Silva took the Gold in the female adult 70kg against Samantha Cook.

The event began with the national anthem of UAE and United Kingdom in the presence of Samira Al Romaithi, UAEJJF board member and Tareq Al Bahri, Director of Abu Dhabi Grand Slam®.

Over 2000 fans attended Day 1 at the Copper Box Arena, Queen Elizabeth Olympic Park, who at times, created an energetic atmosphere in the venue to cheer on the superstar black belts and also the brown and purple belts.

Commenting on his win at the 69kg male adult black belt category, Miyao said: “I am obviously delighted with the Gold medal today, this rounds off a perfect season for me at the Abu Dhabi Grand Slam.

“I am now going to rest and recover for tomorrow’s King of Mats competition, which is a very tough competition to win.”

Miyao, who is one the best jiu-jitsu black belts in the world, has been made the favorite by media and fans to win the Abu Dhabi King of Mats® title tomorrow.

“I have seen that the all media has mentioned me as being the favorite, and the fans expect me to win the Abu Dhabi King of Mats title easily, but I don’t see it that way.

“I don’t think it will be as easy as they think, because we do not have much time to rest between each match and the line-up is the best of the best.”

Commenting on her win at the 70kg female adult brown / black belt category, Brazil’s Thamara Silva, who has also won the Gold in Tokyo, Los Angeles and Abu Dhabi this season said “The 70kg category is one of the most skilled and toughest, so it’s great to win here in London.

A city where jiu-jitsu is growing and I have to say, a lot of that credit goes to UAEJJF for their continued hardwork, support and investment in the sport. I am looking forward to compete next at the Abu Dhabi World Pro in April.”