Bayern back on top of league as Liverpool loom - GulfToday

Bayern back on top of league as Liverpool loom 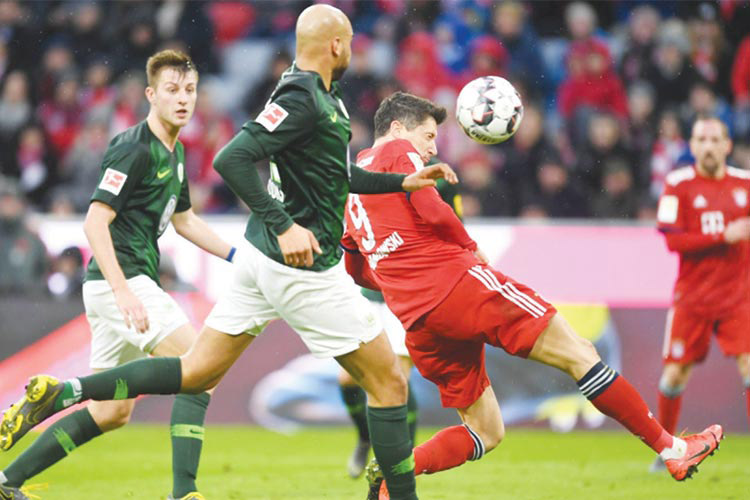 Bayern Munich warmed up for Liverpool by knocking Borussia Dortmund from the top of the Bundesliga for the first time since September with a 6-0 thrashing of Wolfsburg on Saturday.

Bayern, who host Liverpool on Wednesday in their Champions League, last 16, return leg clash after a goalless draw at Anfield, went top on goal difference from Dortmund, who needed late goals to win 3-1 at home to Stuttgart.

Having been told on Tuesday, along with Bayern team-mates Jerome Boateng and Mats Hummels, that his Germany career is over, Mueller took out his frustration, setting up the first goal and scoring Munich’s second.

Gnabry gave Bayern the lead on 34 minutes at the Allianz Arena by tapping home Mueller’s cross, then turned provider three minutes later when he served up a simple tap in for Lewandowski to make it 2-0.

Rodriguez, thriving in the attacking midfield role, got on the scoresheet when his superb 52nd-minute shot hit the top corner.

Having set up the first goal, Mueller showed Germany head coach Joachim Loew what he is missing by wrong-footing Wolfsburg goalkeeper Koen Casteels to score with his heel on 76 minutes.

Kimmich scored with a header on 82 minutes and Lewandowski claimed his second by guiding his header into the far corner three minutes later.

Lewandowski, the top-scoring foreigner in Bundesliga history with 197 goals, has now scored in each of his last seven games against Wolfsburg, who he single-handedly battered in 2015 with five goals in just nine minutes.

In Dortmund, late goals by Paco Alcacer and Chelsea-bound Christian Pulisic saw off Stuttgart, but Borussia are now second after 23 weeks on top.

The win, only Dortmund’s second in their last nine games, was vital to stay level on 57 points with Bayern.

Dortmund took the lead at Signal Iduna Park when captain Marco Reus netted a penalty on 62 minutes after England winger Jadon Sancho was felled in the area.

However, Alcacer calmed nerves when the Spanish striker stabbed home on 84 minutes after a goal-mouth scramble as Reus and Pulisic had shots saved. The third goal came when Axel Witsel beat three defenders, played Mario Goetze into the box to set up Pulisic, who netted in stoppage time.

Third-placed RB Leipzig were held to a goalless draw at home by Augsburg, who beat Dortmund last Friday and went down fighting against Bayern last month.

Mid-table Hertha Berlin crashed to a 2-1 defeat at Freiburg after the visitors captain Vedad Ibisevic cancelled out a Nils Petersen goal, but then scored an own-goal by turning the ball into the Berlin net.

CSKA, unexpectedly defeated 2-0 by Arsenal Tula in their first match after the winter break, opened the scoring in the 24th minute. The 22-year-old Nishimura, who moved to Moscow from J-League side Vegalta Sendai last August, netted his first goal in Russia, hammering the ball home from the edge of the six-yard box after Georgy Schennikov’s cross was headed down by Brazilian winger Mario Fernandes.

In the 83rd minute Chalov netted his 10th goal of the season after he received a pass by Ivan Oblyakov in the area and lobbed the ball into the net over Rubin ‘keeper Yegor Baburin to maintain his lead in the Russian league scorers’ chart.

Late substitute Bijol added a third in the third minute of stoppage time.