After landmark 100th title, Federer promises to play in Dubai next year - GulfToday

After landmark 100th title, Federer promises to play in Dubai next year 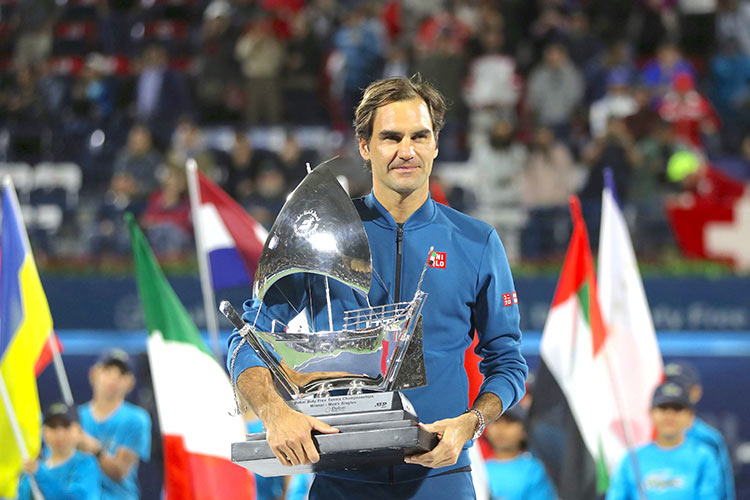 DUBAI: After reaching momentous milestone on Saturday, becoming just the second male player to win 100 singles titles after American Jimmy Connors, Roger Federer confirmed he would be back in Dubai to take part in Dubai Duty Free Tennis Championships’ next edition.

The Swiss maestro made history in Dubai after adding century of career titles to his staggering list of tennis achievements following smooth 6-4, 6-4 win over Stefanos Tsitsipas in the final.

Connors is the other player to reach the landmark, and the American ended his career at 109 titles.

Confirming his participation for next edition, the former world number one said: “I think that was the answer. The idea was for the people to know that I am coming back (to Dubai) next year. That is the plan.

“I have a deal for next year. I thought about it this week because I know they said they were interested to have me again next year, if it was okay to announce it during the week. I said, Absolutely, we can do that.

I don't see myself playing anywhere else but Dubai this week. I'm happy to come here again next year. I've enjoyed too much success. I like the tournament too much. So I will be here next year,” said the world No. 7.

Federer insists he is not particularly hell-bent on becoming the outright most successful men’s player of all time.

He also insists he won't obsess over passing Connors' all-time men's record of 109.

His 100th title comes 18 years after he captured his first in Milan.

Federer said that he's not chasing the 109-mark of Connors.

"You can play a great tournament, play a brutal semi, you get unlucky sometimes with the schedule, whatever it may be.

He added: "That's why you have to be fit on many fronts: mentally, physically; you have to be able to beat different types of players: beat them all on successive days."

Connors, who set his record during his glory years in the 1970s and 1980s, took to Twitter to congratulate the Swiss star.

"Welcome to the 'Triple Digit' tournament victory club @rogerFederer - I've been a bit lonely - glad to have the company," wrote the American.

Federer, who remains a long way back from the all-time mark of 167 titles set in the women's game by Martina Navratilova, said that his two-decade longevity was key to the title century.

"It's a deep satisfaction, an immediate one. A lot of people always emphasise all the Slams, but I play on the ATP Tour. This is where I've won so many of them. Been around for so long," he added.

"I don't rest between Slams all the time, like people think I might be. I think this number proves that. I think that's why this was a very exciting week for me."