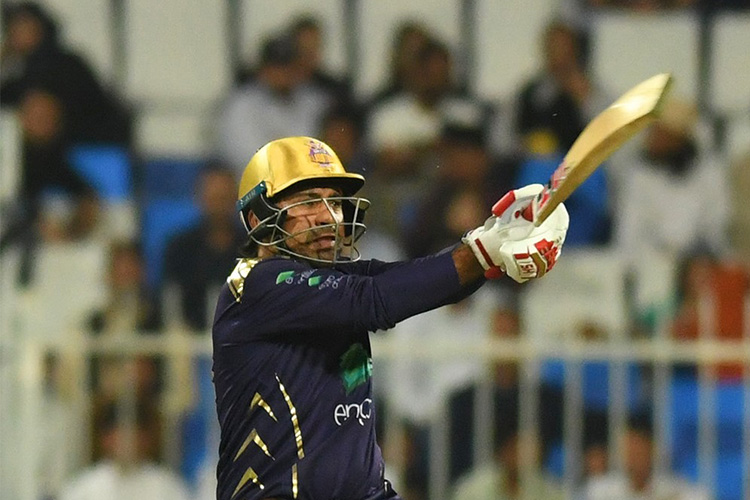 Sarfraz Ahmad plays a shot during the match.

SHARJAH: A resolute Sarfraz Ahmad kept his cool and smashed a six off the last ball to steer Quetta Gladiators to a three-wicket victory over Lahore Qalandars in the first match of the double-header in Sharjah on Saturday.

Sarfraz scored a watchful unbeaten 52 and added 54 runs with Anwar Ali for the sixth wicket to pull out a hard-fought win off the last ball.

Defending a modest total of 143, Qalandars did make some inroads through their spirited bowling attack but failed to keep the momentum going and ran out of steam.

Gladiators lost their first wicket with just one run on the board when Shane Watson was caught by Aron Devcich off Rahat Ali in the first over. He took a stunning catch on the edge of the 30-yard circle to give Gladiators first jolt.

Gladiators kept on losing wickets at regular intervals but opener Ahsan Ali (40) stood firm on one end. He shared three important partnerships, taking the score to 77-4 before being dismissed.

After Ahsan’s departure, Sarfraz led from the front and managed to turn the tide in Gladiator’s favour. At one stage it looked Gladiators would win with ease but a couple of dramatic dismissals towards the end of the innings brought the equation down to two needed off the last ball. Sarfraz hit the full toss from Weise for a six and sealed another victory for Gladiators.

Earlier, Gladiators bowlers exceptionally well to restrict Qalandars to a modest total of 143 in their allotted 20 overs.

Qalandars got off to a faltering start and kept on losing the wickets on regular intervals as Ghulam Mudassar and Sohail Tanveer took three and two wickets respectively, conceding 21 runs each in their quota of four overs.

No batsman other than captain AB de Villiers could put up any kind of resistance against the disciplined bowling of Gladiators.

Nawaz got rid of Fakhar Zaman to give Gladiators their first breakthrough, but when the second wicket partnership between Sohail Akhtar (25) and Salman Butt started looking dangerous, Mudassar struck in quick succession twice to derail Qalandars’ innings.

The two quick wickets brought De Villiers into the middle. Qalandars needed someone to bat till the end if they had to reach a respectable total on a slow pitch where the ball was not coming on to the bat nicely.

He knuckled down to the task of anchoring the faltering innings and at the same time keeping an eye on the run rate. De Villiers added 37 runs for the fourth wicket with Corey Anderson, taking the score to 78-4.

Both the batsmen kept the scoreboard moving without taking too many risks. They played their shots along the ground. So cautious were the two that Anderson did not hit a single boundary during his stint at the crease.

Anwar Ali got Anderson caught by Nawaz to push Qalandars on the backfoot again. Once again the same pair of De Villiers and David Weise, which guided them to an improbable win a day before, were in the middle.

Both the batsmen were trying to apply all their experience and expertise on a slow moving pitch to give Qalandars a fighting total on the board.

The duo added another 40 valuable runs before Tanveer had Weise caught by Smith to break the partnership. After his dismissal, Qalandars lost wickets in quick succession to wind up the innings on 143/7.

Earlier, in the second match of the double-header on Friday, captain Mohammad Sami grabbed a stunning hat-trick to guide Islamabad United to a well-deserved 12-run victory over Peshawar Zalmi in a tense finish.

United posted a challenging total of 158/9 and later bowled out Zalmi for 146. Sami returned with a figure of 3-22. Kireon scored a 22-ball 51 but failed to take his over the line.