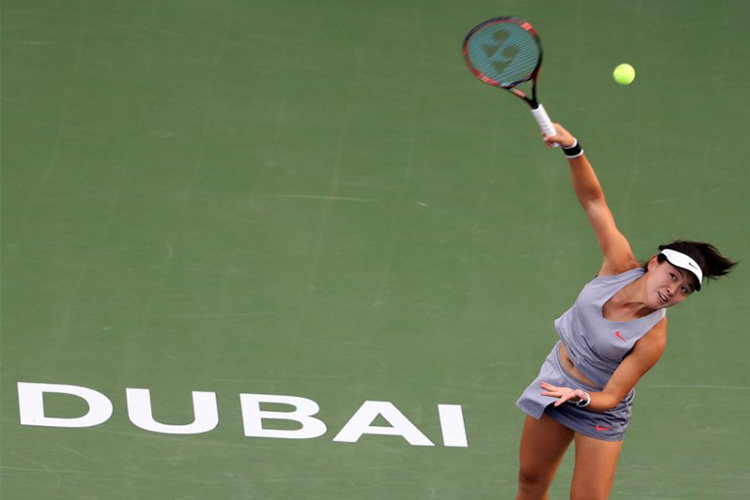 The Chinese defeated Qatar Open champion Mertens in a almost three hours, 5-7, 6-4, 7-5 to move through to the second round.

Mertens claimed the biggest title of her career by beating top seed Simona Halep to win the Qatar Open on Saturday.

Making second appearance in the event, Lin, who lost the first round in Doha, took almost three hours to beat the world No.21.

The Chinese broke the Belgian in the second game of the opening set and went ahead 3-0. Mertens later got three breaks to claim the first set 7-5. Lin and Mertens exchange serves early in the second set. Bouncing back, the world No.108 won the second set to stretch the match into the third set and dug deep to seal the victory.

"I think when I was 5-3 in the first set, I kind of like, Oh, I'm 5-3. I kind of forgot what I have to focus on. Then after I lost my first set, I think, I have to focus on what my coach tell me, play my tennis. She's a competitor. She always fight until the end of match. I really happy that I am the winner today, said Lin in a post match press conference.

"I know how she play because we play last year once, and I lost. I know it's always going to be tough to play against her. Yeah, prepared before this match, and I talked to my coach.”

Earlier, Julia Goerges became the first seed to bow out after losing the first round encounter against Alison Riske.

The world No.51 Riske broke the Wimbledon semi-finallist thrice in the opening set. Trying to make a comeback, the world No.13 from Germany got a break in the first game of the second set and took 2-0 lead. The 2012 finalist in Dubai failed to capitalise on the advantage as Riske levelled at 2-2 and later won the next two game to go up 4-2.

Goerges broke back in the ninth game to draw level 5-5 but later Riske closed out the victory on her second match point.

Riske will next face the 2014 Dubai finalist Alize Cornet. Earlier, Jelena Ostapenko made a first round exit after losing to United States’ Jennifer Brady 6-4, 6-0.

Brady took one hour and 15 minutes to get past Ostapenko. With two breaks, Brady took the opening set 6-4.

Maintaining the pressure, Brady broke her opponent three times in a row to book spot in the second round.

"I think I was pleased with the way, regardless of how I started the match, I was able to finish strong. I'm really happy with the way I did that," Brady said.

"I think another thing that I did well was just looking for forehands, trying to hit as many forehands as possible, taking advantage of her second serve, which was weak. I was able to be aggressive and dictate off that,” she added.

Another seed to join Goerges in the departure lounge was Annett Kontaveit, The 15th seed from Estonia lost to China's Shuai Zhang 7-6, 6-3.

The world No.21 Kontaveit took a 3-1 lead in the opening set only to see Zhang levelling at 3-3. Zhang got the break in the 11th game before closing out the set.

In the second set, both the players exchange breaks. The Chinese qualifier broke Kontaveit to lead 5-3 lead and later wrapped up the battle.

Zhang will face Carla Suarez Navarro in the next round after the Spaniard brushed aside Czech Republic’s Barbora Strycova 6-1, 6-3.

Kenin will face last year's finallist Daria Kasatkina while Jakupovic meets fifth seed Angelique Kerber in the next round.

World No.14 Caroline Wozniacki pulled out of the tournament due to a viral illness.The No.9 seed had been scheduled to play Stefanie Voegele, herself a lucky loser after the withdrawal of Samantha Stosur, in the first round.

The Dane won the Dubai title in 2011 and has reached at least the semi-finals on another four occasions, finishing as the runner-up to Elina Svitolina in 2017, when she last played the event.

Wozniacki, who also pulled out of last week’s Qatar Open, has been unable to recover in time to compete in Dubai.

"It sucks, if we're being honest. I prepared, I've gotten ready to play these two weeks, and two weeks I usually play well in. It's two hard court tournaments. They fit my game well. It's good speed for my game. "It sucks. I was hoping that maybe taking a little bit of time to myself and just trying to recover, I was hoping I was going to be ready to play today. I just wasn't.

"I have to be fair to myself, as well. If I can't even play at a reasonable level, there's no reason for me to go out there and just, you know, yeah, play one set. I want to go out there and I want to win. Every time I play a match, I think I can beat the opponent, I think I can win the tournament. I don't feel like that right now,” she added. She has not returned to the court since suffering a third-round loss to Maria Sharapova at the Australian Open in January.