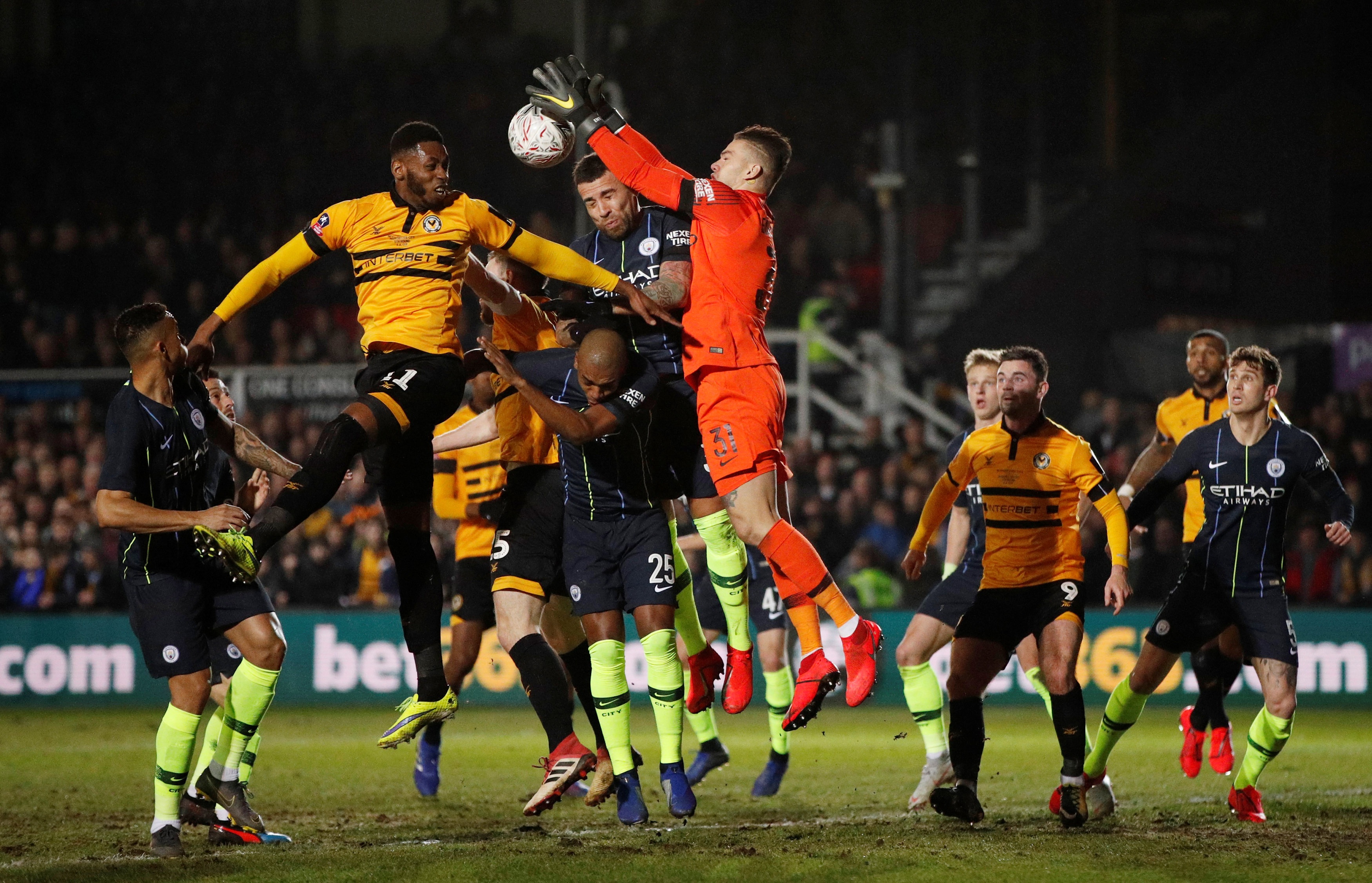 Newport County AFC and Manchester City players in action during their FA Cup Fifth Round match on Saturday.

London: Manchester City powered into the FA Cup quarter-finals as the Premier League leaders survived a battling display from Newport County to beat the fourth-tier minnows 4-1 on Saturday.

Pep Guardiola's side didn't have an easy ride in a full-blooded fifth round tie against a team 82 places below them in League Two.

Troubled by the rutted Rodney Parade pitch, City were indebted to Ederson for a superb save to keep them level during a lacklustre first-half display.

City eventually hit their stride in the second half and Leroy Sane's powerful finish put them ahead before Phil Foden doubled the lead.

Newport refused to surrender and Padraig Amond's late goal could have set up a tense finale, only for Foden to net again 79 seconds later before Riyad Mahrez wrapped up the win.

"It was a really tough game. We opened the scoring in the game and believed it was done. They showed us how incredible they are and a big compliment for them," Guardiola said.

"The home crowd was amazing, winning here, I understand English football today better than ever and how tough the cup is in these conditions."

With their Champions League last 16 first leg against Schalke to come on Wednesday, followed by the League Cup final against Chelsea, Guardiola made seven changes to the side which hammered Chelsea 6-0 last weekend.

"You play League Two then Champions League. You have to adapt and change mentality and that means a lot to grow like as a team. The big mistake is believing you are better than anyone," Guardiola said.

"It is a mistake, like United are praised and better than PSG, but you see what happened. You have to be calm and prepare well."

The gulf between the clubs is enormous, with Newport's squad costing just £50,000 and City's totalling £450 million.

But Newport had already knocked out Premier League side Leicester and Championship outfit Middlesbrough in the previous two rounds.

Guardiola had warned City they would "suffer" at set-pieces against Newport's "taller, stronger" players and the Spaniard's fears were nearly confirmed in the 14th minute.

Failing to deal with Mickey Demetriou's long throw, City left space for Tyreeq Bakinson and he headed goalwards from close range, only for Ederson to dive to his right to make a brilliant one-handed save.

Bothered by the unpredictable surface, left badly damaged by heavy use from two rugby unions teams as well as Newport, City were unable to get any momentum and another long throw ended with Joss Labadie lashing wide.

Mahrez couldn't hit the target with a series of half-chances and Sane grazed the top of the crossbar from an acute angle as Newport gamely reached half-time on level terms.

Newport's brave resistance was finally broke in the 51st minute, with Gabriel Jesus teeing up Sane for a fierce strike that smashed into Newport keeper Joe Day's face before looping into the net.

Amond punished woeful defending from Aymeric Laporte and Nicolas Otamendi to lob home from the edge of the area in the 88th minute.

But young midfielder Foden went straight down the other end to blast City's third and Mahrez slammed in the fourth in the final seconds.

Brighton moved into the quarter-finals for the second successive season as goals from Anthony Knockaert and Jurgen Locadia clinched a 2-1 win over Frank Lampard's Derby.

Chris Hughton's side opened the scoring after 33 minutes at the Amex Stadium when Knockaert bent his first-time shot into the bottom corner.

The Seagulls doubled their advantage as Locadia fired home in first half stoppage-time after Yves Bissouma's effort hit the post.

Former Chelsea and Arsenal star Ashley Cole set up a tense finish when the Derby defender headed in after 81 minutes.

Championship strugglers Millwall are also through to the quarter-finals after a 1-0 win at third tier AFC Wimbledon.

Neil Harris's side made it to the last eight for the second time in three years thanks to a fifth minute header from Murray Wallace, who scored their shock winner against Everton in the previous round.