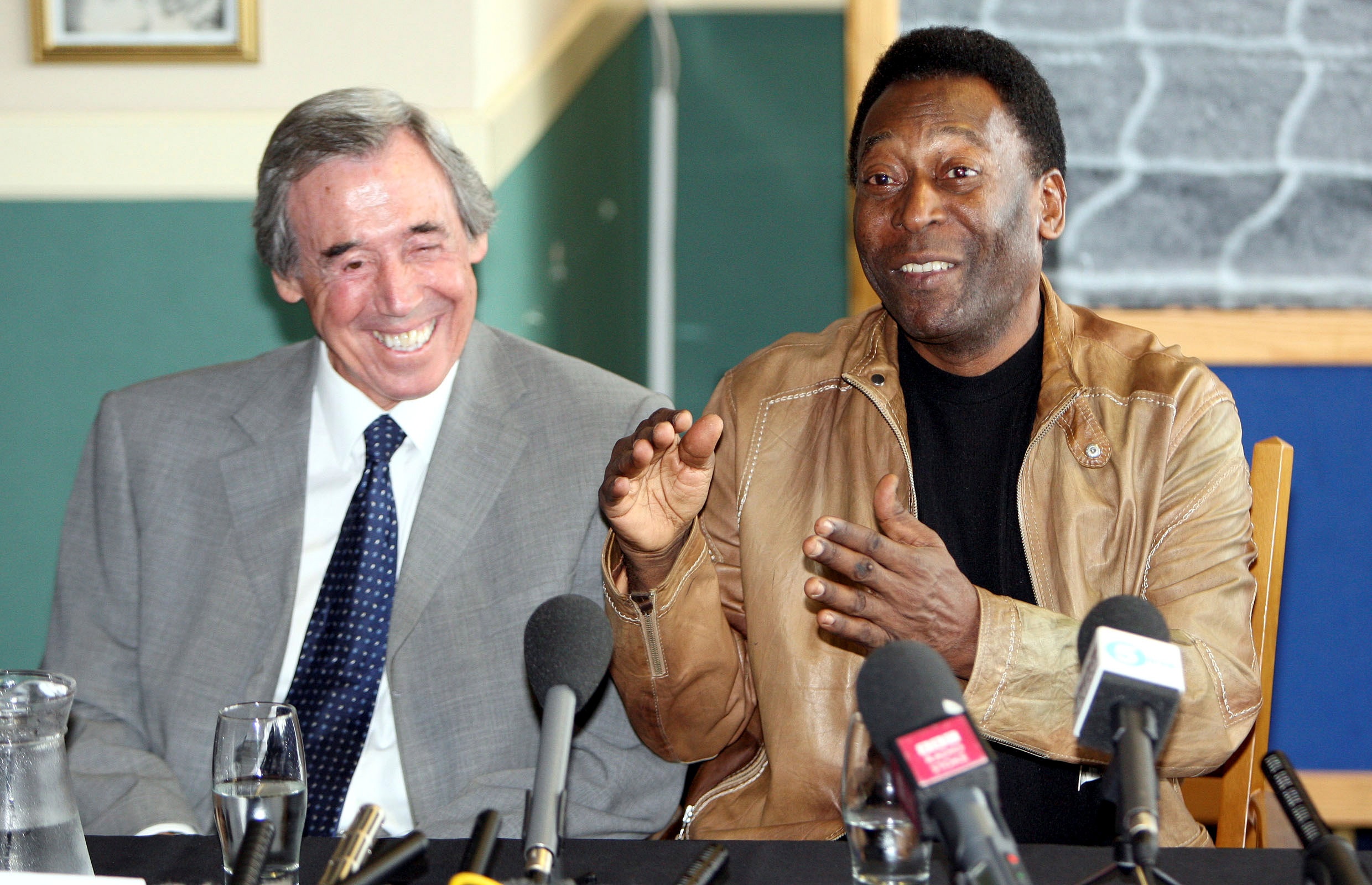 Ex Brazil player Pele (right) and Ex Stoke City and England player Gordon Banks during the press conference ahead of a charity match in 2012.

London: Gordon Banks, England's goalkeeper during their triumphant 1966 World Cup campaign, has died aged 81, his former club Stoke City announced on Tuesday.
His family said the 73-times capped Banks, who lost an eye in a car crash in 1972, had passed away in his sleep.
Geoff Hurst, who scored a hat-trick in the 4-2 win over West Germany in the World Cup final at Wembley, tweeted a tribute to his former team-mate.
"Very sad to hear the news that Gordon has died. One of the very greatest," tweeted 77-year-old Hurst.
Banks, who played in every game of the 1966 campaign on home soil, is probably best known for a wonderful save he produced to deny Brazilian great Pele in a 1970 World Cup group match.
"The save was one of the best I have ever seen -- in real life and in all the thousands of games I have watched since," Pele said.
"He came from nowhere and he did something I didn't feel was possible.
"I am glad he saved my header -- because that act was the start of a friendship between us that I will always treasure," the three-time World Cup winner added.
"Once I got my hand to it I hadn't a clue where it was going," Banks modestly said afterwards.
Pele -- who would go on to lift the trophy -- admitted later he had said 'gol', so sure was he that the ball was heading into the net. Brazil still won the game 1-0.
However, Banks later recounted that he did not appreciate the remark made by one of his team-mates that day, midfielder Alan Mullery.
"I patted him on his head, and I said 'why didn't you catch it?' and the abuse that came back was unbelievable," said Mullery.
Mullery said Banks was probably the best goalkeeper he had played with or against.
"He was the best at that time. We had some great goalkeepers in those days, and the only person I can think came near was Pat Jennings," said Mullery.
"He was absolutely marvellous goalkeeper. He was a likeable man, and when it came to business, he was probably the best there has ever been."

Banks, whose club playing career revolved largely around Stoke and Leicester City, is the latest of the 1966 team to pass away.
Captain Bobby Moore, Alan Ball and Ray Wilson preceded him while several such as Nobby Stiles and Martin Peters suffer from Alzheimer's.
Another former Leicester and England legend Gary Lineker -- albeit from a later generation -- also tweeted his appreciation of Banks, whose sole trophies at club level were two League Cups, one apiece with Stoke and Leicester.
"Oh no. Gordon Banks, an absolute hero of mine, and countless others, has died," tweeted Lineker.
"@England's World Cup winner was one of the greatest goalkeepers of all time, and such a lovely, lovely man. #RIPGordon."
Stoke City chairman Peter Coates said Banks -- who played 250 times for the Potters after he joined the club from Leicester in 1967 -- had not been in good health for several weeks.
"We've been expecting this, he has been poorly for a number of weeks but it's a very sad day for us, we love him so much," said Coates.
"He made his home in Stoke, and was very much part of the fabric of the club. You don't get too many like him, and he was immensely modest for all talent.
"He told me when they walked out at Wembley for the final, and he had goose-bumps, he had never seen anything like it."
"It is with great sadness that we announce that Gordon passed away peacefully overnight," his family said in a statement on Stoke's website.
"We are devastated to lose him but we have so many happy memories and could not have been more proud of him," they added.