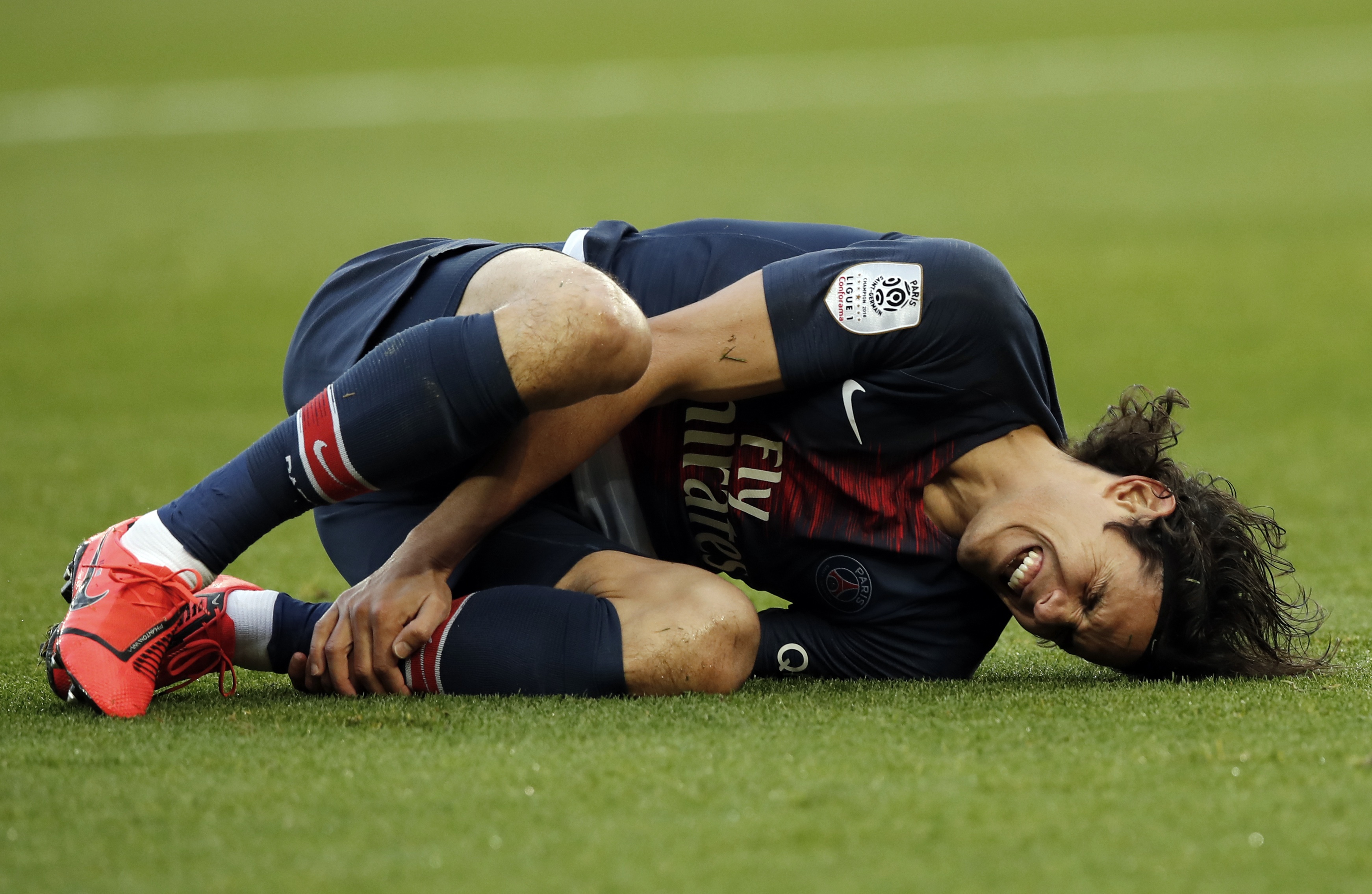 PSG's Edinson cavani reacts as he falls during the French League match against Bordeaux at the Parc des Princes stadium in Paris on Saturday.

Cavani appeared to hurt his leg while taking the penalty three minutes before half-time that gave PSG a 1-0 win over Bordeaux at the Parc des Princes in Ligue 1.

Television replays showed the Uruguayan grimacing and asking to be substituted. He left the pitch moments later and was replaced by Kylian Mbappe at half-time.

Losing Cavani, who is PSG's all-time leading scorer and has netted 22 times this season, would be another huge blow to the French champions ahead of Tuesday's Champions League last 16, first leg at Old Trafford.

"I don't know if he can play. He came off after taking the shot, it is a muscle problem," said Tuchel.

"We will have to wait another night and day to have a clearer idea and get more tests done."

PSG are already missing Neymar for the tie against a resurgent United, with the Brazilian not expected back from a metatarsal injury until early April.

He was in attendance at Saturday's game, which saw Marco Verratti make his return to action after three weeks out with an ankle injury.

"It is too much. These are quality players for decisive matches. Not everyone can play at that level in the Champions League. We don't have a second 'Edi'", Tuchel told Canal+, but he later insisted that he did have solutions in mind if needed.

"We must analyse Manchester United, and remain calm and confident.

"If two or three key players are not there, it is our responsibility to find solutions.

"It is super difficult, and if we are missing several players, the challenge is even greater. But we will be ready on Tuesday."

At least the win allowed PSG -- whose shirts carried the players' names in Mandarin in a nod to the Chinese New Year -- to get back on track after last week's 2-1 loss at Lyon, their first Ligue 1 defeat this season.

The reigning champions are 13 points clear at the top with a game in hand on second-placed Lille, who visit Guingamp on Sunday.

Such is their margin for error domestically that Tuchel could afford to wrap a host of key players in cotton wool with the Champions League in mind.

As a result, Mbappe started on the bench while Angel di Maria, Marquinhos, Juan Bernat, Thilo Kehrer and Julian Draxler -- all probable starters in midweek -- were left out completely.

Verratti lasted just under an hour before making way for recent signing Leandro Paredes, and Tuchel must now decide whether to start the Italian playmaker in England.

Cavani and Moussa Diaby came close for the home side in the first half-hour, either side of Eric Maxim Choupo-Moting being denied by a terrific save from Bordeaux 'keeper Benoit Costil.

Bordeaux held PSG at home when the teams met in December, but they were undone late in the first half here as Nicolas de Preville fouled Thomas Meunier in the box, and Cavani netted from 12 yards.

Mid-table Bordeaux slumped to a fourth straight loss between league and cup, although they nearly equalised on the hour when Francois Kamano's shot from 20 yards was superbly saved by Gianluigi Buffon.

Across France, a minute's applause was held before all games in tribute to Emiliano Sala, and his old team Nantes will wear black shirts as they mourn the Argentine striker in their game against Nimes on Sunday.

European hopefuls Strasbourg lost 2-1 at home to Angers on Saturday, while Amiens beat Caen 1-0 to climb above Monaco and out of the relegation zone.

Mario Balotelli and Lucas Ocampos scored as Marseille won 2-1 at Dijon on Friday.