Britain could be heading for a general election - GulfToday

Britain could be heading for a general election 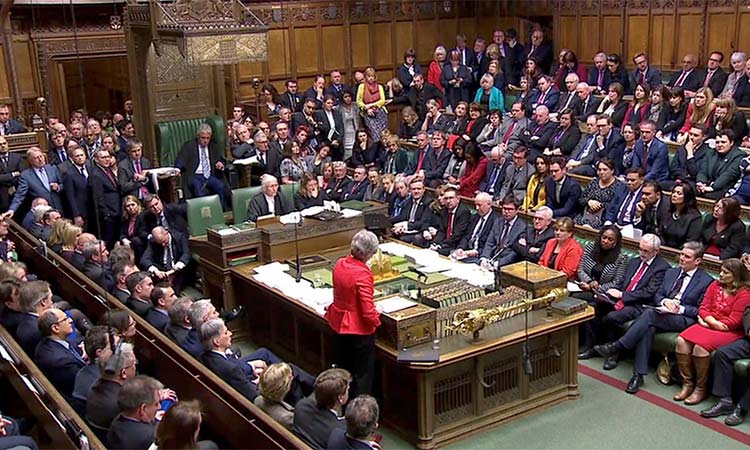 British Prime Minister Theresa May speaks in the parliament in London. Reuters

Britain needs a Labour government. With the NHS in crisis, the economy slipping into recession and the adverse impacts of austerity blighting lives and communities, we urgently need a change of direction.

The Tories meanwhile are drifting further into the realms of fantasy economics and diplomacy. Their increasingly shrill demands for a no-deal Brexit, encouraged by Boris Johnson’s aping of Farage, clash with a parliament that is adamant it will not allow no deal to happen. As a result, a general election seems increasingly likely.

Given all that’s at stake, if we do face a general election Labour needs to be ready to fight and win. We have a bold offer to the country in many policy areas – including the economy, tackling climate change and ending inequality. The truth is though that we will not get a hearing on any of these issues if we fail to offer a clear answer to the single most important political question of the era – are we Leave or Remain?

The time for sitting on the fence and trying to appeal to both sides has long gone. Brexit is the issue that defines our current politics, our party, the next general election and probably the next couple of decades of political debate. Failing to take a stand does not mean that we appeal to all voters – it means that we appeal to none.

The hard truth for those in positions of leadership in the Labour movement is that Labour is at heart a Remain party. Most of our members, voters and MPs are Remainers – we believe in internationalism and that we achieve more together than we do apart. We believe that the challenges of our age are best addressed by socialists, here and in Europe, cooperating to stop climate chaos and the dangerous far right populism that is represented by Farage and his allies.

We know that there are both moral and electoral arguments to be made for stopping Brexit. Morally, Brexit would harm the communities we serve, manufacturing would be decimated, while whole industries, including the car industry and aerospace, could close, costing thousands of jobs.

There is also an electoral case to be made. The vast majority of polling over the last year has shown that Labour’s only route to a majority is to take hold of the bulk of the Remain vote and add that to our Labour-loyalist vote. The possibility of building that coalition still exists, but the window is closing.

The voters want clarity. A fence sitting half-way house has already been shown to be a failure and is likely to split the Remain vote, probably leading to a Tory majority and a harder-than-ever Brexit. The possibility of a Brexit Party/Tory pact adds to the necessity to get this right. A split Remain vote, up against a united Leave vote, could result in a Tory/Brexit landslide along the lines of Thatcher’s 1983 result, where her reduced vote share still led to seat gains due to the split on the left.

There is no doubt that the recent shift in position from the leadership is a significant move by the party and formerly opposed unions. Labour and union backing for Remain and a referendum on any Tory deal will gain us a hearing among some voters. This shift is a direct result of the campaigning done by pro Remain members and unions over the last year.

However, while this move is welcome, to many it still seems like more prevarication. The TULO policy is clearly designed to give Labour something to say both to Leavers and Remainers. Leavers would get the prospect of a “better Labour Brexit”, while Remainers would get the promise of a referendum with Remain on the ballot. In theory this keeps everyone happy; in practice it will satisfy no one.

A policy that commits to negotiating a new deal forgets that Brexit is increasingly about identity, not economic outcomes. Leavers want “their country back”, while Remainers want to live in an open, connected, confident nation that partners with others to the greater good. Any deal on Brexit – that isn’t Remain or no deal  – would fail to gain support from either group.