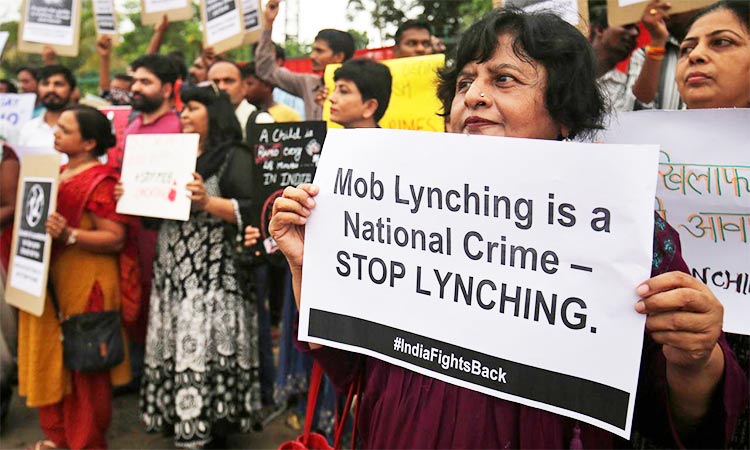 People shout anti-government slogans during a protest against mob lynchings across the country in Ahmedabad. Reuters

Mob lynching is a barbaric, inhuman and criminal act. Protests held in several Indian cities on Wednesday following the lynching of a Muslim man last week by a Hindu mob indicate that there is growing anger across the country over the lack of strong governmental action to end such unpardonable incidents.

Hate crimes against minorities have increased since Prime Minister Narendra Modi and his Hindu nationalist Bharatiya Janata Party (BJP) came to power in 2014.

Several Muslim men have been attacked or lynched by Hindu mobs since then, many on suspicion of slaughtering cows.

In the latest incident, cellphone videos shared on local television channels showed 24-year-old Tabrez Ansari tied to a pole and begging for mercy as some men beat him with sticks and forced him to chant his devotion to Hindu gods in the eastern state of Jharkhand.

Ansari was reportedly caught by a mob of villagers who suspected he was a thief in the Seraikela-Kharsawan area of Jharkhand on June 18. Villagers called the police and lodged a case against Ansari, and police took him to the hospital, but Ansari succumbed to his injuries while in custody four days later.

Ansari’s family and his neighbours have been vociferous in saying that it was very unlikely he would have been involved in a case of stealing. Recently married, he had planned to take his wife to Pune, where he has been working as a welder.

Several brutal aspects of the lynching are yet to be addressed by the authorities and a thorough and transparent investigation is absolutely necessary. A serious lapse in the way police acted in the case is also palpable and questions remain why Ansari was not given timely medical treatment.

The culprits should not be, under any circumstances, allowed to get away.

Incidentally, just two days after Ansari’s killing, a Muslim religious school teacher in West Bengal’s Kolkata city alleged he’d been pushed off a moving train when he refused to chant his devotion to Hindu gods as some Hindu men in the train demanded.

The US Commission for International Religious Freedom (USCIRF) has righty called on the government to take concrete action to prevent this kind of violence and intimidation.

As USCIRF chairman Tony Perkins pointed out, lack of accountability would only encourage those who believe they can target religious minorities with impunity.

The United States had last week released an annual report on international religious freedoms that said religious intolerance was increasing in India and extremist narratives had “facilitated an egregious and ongoing campaign of violence, intimidation, and harassment against non-Hindu and lower-caste Hindu minorities.”

Congress president Rahul Gandhi is also correct in stating that the lynching incident is a blot on humanity.

All these years, it has been India’s firm embrace of the concept “unity in diversity” that amazed the rest of the world. Any attempt to dent that image would only prove counter-productive.

Increasing anger about the merciless killing in Jharkhand did eventually prompt Prime Minister Modi to make his first comments on the matter, telling the upper house of parliament he was “pained” to hear about it and calling for “the strictest possible punishment to the accused.”

However, such mere words of condemnation are not enough. Governments, both in the state and centre, need to act decisively against mob lynching without delay and with a firm hand.

The message should be so strong that such brutal incidents never recur.