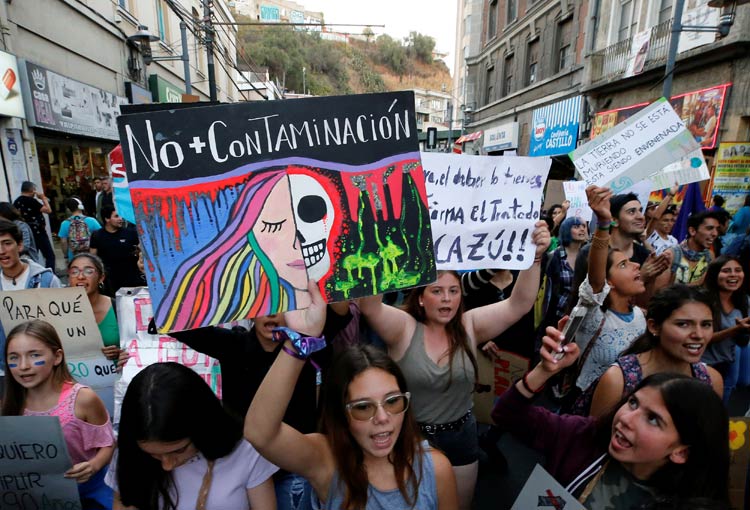 Climate change is accelerating faster than efforts to counter it and laxity on the part of the international community could prove disastrous for future generations.

The consolation, though, is the visibly increasing awareness on the subject, especially among youngsters. The protest by thousands of students from across Europe on Friday near a coal mine in western Germany urging governments to take bolder action against climate change sends a clear signal that climate change is now one of the hottest issues on the European political agenda.

Protesters from 16 countries took part in the rally in Aachen, near Germany’s border with Belgium and the Netherlands.

What has added to global disappointment is the push by most European Union nations for the world’s biggest economic bloc to go carbon-neutral by 2050 being dropped to a mere footnote at a summit on Thursday after fierce resistance from Poland, the Czech Republic and Hungary .

France and Germany took the right approach of leading efforts for the 28-member EU to lead by example in setting an ambitious new climate goal ahead of UN climate talks in September that US President Donald Trump has abandoned.

Unanimity was needed and last-ditch persuasion efforts in what diplomats described as “impassioned” talks that dragged on for four hours failed to ease fears among the central and eastern European states, including Estonia, that it would hurt economies like theirs dependent on nuclear power and coal.

Scientists have repeatedly warned that ending fossil fuel use by mid-century is a must if countries want to achieve the 2015 Paris climate accord’s most ambitious goal of keeping global temperatures from rising more than 1.5 degrees Celsius compared to pre-industrial times.

British broadcaster and environmentalist David Attenborough has stated that climate change is humanity’s greatest threat in thousands of years, and he is absolutely right.

The situation is dire because, as Attenborough noted, the issue could lead to the collapse of civilisations and the extinction of “much of the natural world.”

The extreme cold in North America, record high heat and wildfires in Australia, heavy rains in parts of South America, and heavy snow on the Alps and Himalayas should be seen as warning signals.

Even with just one degree Celsius of warming so far, Earth has been bombarded with raging wildfires, widespread crop failures and super-storms exacerbated by rising sea levels.

Climate change has even been damaging polar bears’ sea-ice habitats and forced them to scavenge more for food on land, bringing them into contact with people and inhabited areas.

Germany, Europe’s biggest economy, has long promoted clean renewables such as solar and wind while phasing out nuclear power -- but it is still missing its climate goals because of a reliance on cheap coal.

Especially since last year’s scorching summer — when drought slashed crop yields, forest fires raged and shipping was halted on dried-out rivers -- many people in Germany tend to agree with the protesters’ demand on carbon fuels.

A growing number of people, governments, cities and businesses understand that climate solutions can strengthen economies and improve air quality and public health. Unfortunately, it looks like there is still a long way to go.