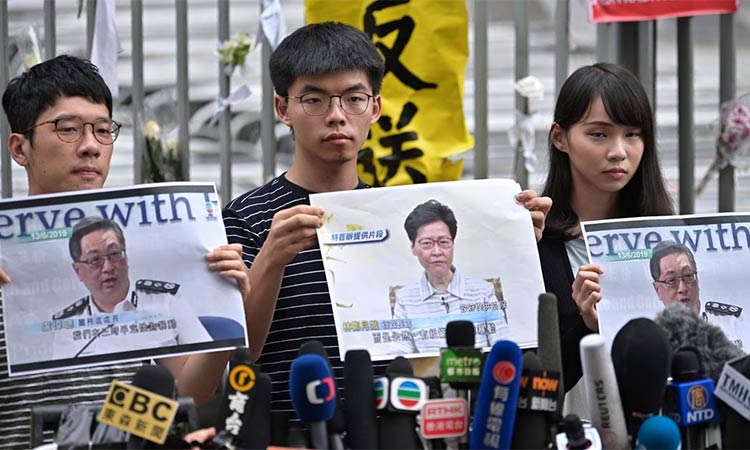 The photo has been used for illustrative purposes. File/AFP

With thousands of protesters blockading Hong Kong’s police headquarters on Friday, it is apparent that anger and resentment persist among people, who are demanding the resignation of the city’s pro-Beijing leader.

The territory is witnessing the worst political crisis in decades and an immediate solution looks unlikely.

Among the primary demands of Friday’s marchers is that the government drop all charges against those arrested in last week’s clashes, charge police with what they describe as violent action and stop referring to the protests as a riot. So far, there are no signals that such demands are being met.

The fact that many were taking part in the protest in sweltering heat of about 32 degrees Celsius is an indication that the demonstrators want to send a strong message to the government that they do not agree with the extradition plans.

Opposition to the extradition bill has united a wide cross-section of Hong Kong, right from influential legal and business bodies to religious leaders.

Pressure is also mounting on the government over the police role with rights group Amnesty International claiming it has verified multiple instances of police violence that breached international laws and the Hong Kong Bar Association adding its voice to calls for an investigation into police tactics.

The Bar Association has asked the government to withdraw the extradition bill and make a commitment that any legislation would not proceed without having a full and open consultation.

The ground reality is that the people have not accepted Hong Kong Chief Executive Carrie Lam’s argument that the extradition law was necessary to prevent criminals hiding in Hong Kong and that human rights would be protected by the city’s courts which would decide on any extradition on a case-by-case basis.

The protests pose the greatest popular challenge to Chinese President Xi Jinping since he took power in 2012.

The dramatic suspension of the bill was one of the most significant political retreats by the Hong Kong government since Britain returned the territory to China in 1997.

Hong Kong has been governed under a “one country, two systems” formula, allowing freedoms not enjoyed in mainland China but not a fully democratic vote.

If at all anything, the continuing turmoil has raised questions over Lam’s ability to govern, two years after she was selected and pledged to “unite and move forward”.

A government spokesman had earlier conceded that poor government work over the bill had led to substantial controversies and disputes in society, causing disappointment and grief.

Justice Secretary Teresa Cheng has now become the latest government minister to apologise over the bill. “Regarding the controversies and disputes in society arising from the strife in the past few months, being a team member of the government, I offer my sincere apology to all people of Hong Kong. We promise to adopt a most sincere and humble attitude to accept criticisms and make improvements in serving the public,” Cheng wrote in her blog.

While Lam has admitted shortcomings over the bill and said she had heard the people “loud and clear”, she has rejected repeated calls to step down.

Hong Kong’s international reputation as an Asian financial hub is being disturbed by the continuing protests and a lack of proper vision on the part of the authorities to end the turmoil.

As the pro-democracy demonstrators have vowed to hold another mass rally on July 1, it seems Hong Kong is likely to witness an extended period of turbulence. And that is distressing.