The reason why GOP and dems are scared of Warren - GulfToday

The reason why GOP and dems are scared of Warren 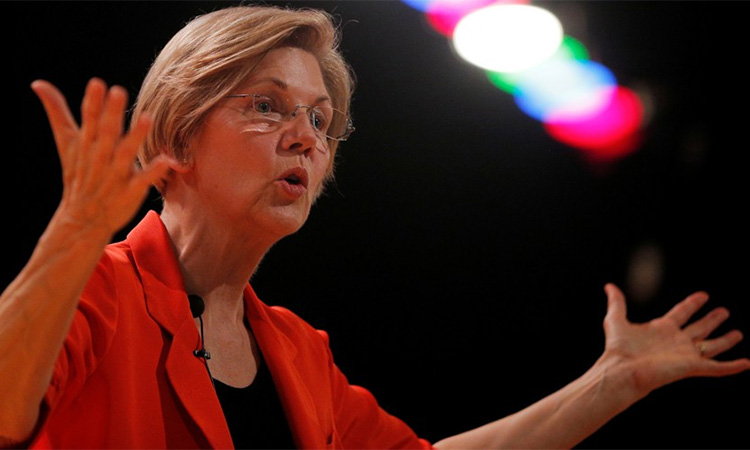 In early June, an unnamed adviser to Democratic presidential candidate Bernie Sanders used the anonymity afforded to him by a reporter to berate one of Sanders’ main competitors: Elizabeth Warren.

Speaking with US News & World Report, the adviser, whose comments were described by many as “cutthroat” — though “cowardly” feels like a better fit to me — was dismissive of the possibility of a Warren presidency.

“Warren fundamentally fails a basic threshold question: Can she beat Trump?” the unnamed adviser explained. “Look at all the general election polling. She does the worst of all the candidates tested. That’s the DNA test debacle. It just fundamentally killed her. People want somebody who can beat Trump. She loses that argument.”

Sanders’ longtime strategist, Jeff Weaver, who made his own comments on the record, was equally dismissive (even if he did package up his thoughts with false-sounding niceties). “She’s basically flat,” Weaver said. “I know all of you think she’s surging. This campaign has great respect for Elizabeth Warren. That’s not a dis on Elizabeth Warren, by the way. That’s just where the numbers are. High single digits, 8, 9 per cent.”

The article where this quote appears is titled “How the Revolution Ends,”and purports to detail how the Democratic nomination might once again be “stolen” away from Bernie Sanders by the apparent all-powerful Democratic National Committee — who, by the way, began 2019 in debt. It read as a preview of the excuses that might come should Bernie Sanders fail to secure the nomination in 2020. As fate would have it, mere weeks after those comments from Sanders’ people were made, more recent polling shows that Warren’s support has risen and, in a trio of polls, she surpasses Sanders.

The Trump re-election campaign has noticed and is taking her ascension with the seriousness it warrants. In a recent Politico report titled “Trump campaign zeroes in on a new threat: Elizabeth Warren,” Trump campaign officials acknowledged that after initially dismissing her as a non-factor in the looming presidential race, her rise in polling coupled with her populist message has put them on notice. In a text message to Politico, Trump campaign pollster John McLaughlin wrote: “Although our own early published polls and internal polls discounted Elizabeth Warren, her recent momentum in May and June in national and early caucus and primary states into a strong second place to a flat Joe Biden is a cause for our campaign’s attention.”

Although Biden will still receive much of their attention, Politico’s Alex Isenstadt notes: “Trump aides say they’re less certain that he’ll be their eventual opponent.”

The supposed inevitability of Joe Biden is predicated on the lingering delusions of a majority white political commentariat that chooses to be willfully ignorant about the factors behind Donald Trump’s win. This was always about racism and propaganda; it was never about “economic anxiety”.

It’s easier for many to buy into the folklore of “economic anxiety” fueling Trump supporters (despite evidence to the contrary) because it yields them the easiest solution for 2020: just elect a different old white dude. Yet Warren’s disciplined style, populist-infused speeches, and perceived ability to win over suburban female voters have propelled her into the spotlight — and now Democrats and Republicans are struggling to deal with the reality of her success. The people paid handsomely to know better should have.

We can imagine how Trump will start off trying to discredit Warren. This is a man who uses the racial slur “Pocahontas” every chance he gets, after all. While Warren should have settled this issue several years ago, as it stands now, the biggest mistakes made on that issue — releasing a videoclaiming a DNA test taken proved she had distant Native American ancestry to scorn and ridicule, after which Warren had to apologize — are behind her. Trump might try to breathe life back into that self-inflicted scandal, but I can’t imagine it will get much further traction.

The reason why Warren has been discounted is the same reason her “likeability” is gauged in ways her male competition is not, the same reason her intellect and overall wonkiness is compared to a man who initially said he didn’t want “drown people in minutia,” and why even favorable profiles still question her electability. It is sexism, but while that may be Warren’s burden to bear, it does not have to dictate her fate.

Let’s not forget that Joe Biden has more baggage than anyone else running. Like with Sanders, his campaign managers no doubt know this, and will be just as willing to publicly discredit her as their Republican counterparts. If they can resist, however, they should. Straight white men lining up to attack more diverse candidates won’t be a good look for 2020, whichever voters the eventual candidate wants to play to.

Warren will need to capture a sizeable portion of the black vote in the primary to secure the nomination, which means seriously engaging with racial justice. She has made a good start on that, choosing to address racial disparities in healthcare and housing, marijuana legalization and structural prejudice in a number of public appearances (notably, she mentioned all of these early in her campaign, rather than as necessary afterthoughts.) But she still has a long way to go.

After that, of course, she’ll have to survive being decried as socialism’s answer to Cruella de Vil by the right. There will be a lot of bait she’ll have to resist rising to, lest she find herself categorized as “emotional”, “incompetent” or “all over the place”. Something tells me the nickname that comes after Pocahontas will be even more offensive than its predecessor.

What Warren’s meteoric rise has shown most of all is how important it is not to make political calculations based on the faulty formula that being a loud white guy lends you “electability”. This word has increasingly become a dog-whistle for “how much you resemble the other men in government” and is now being deployed by Democrats and GOP members alike in an effort to keep the White House white and male. I decided not to subscribe to the “electability” narrative a long time ago — and I’ve found it gives one a much more clear-eyed view of how 2020 might turn out to be. I invite others to try it.