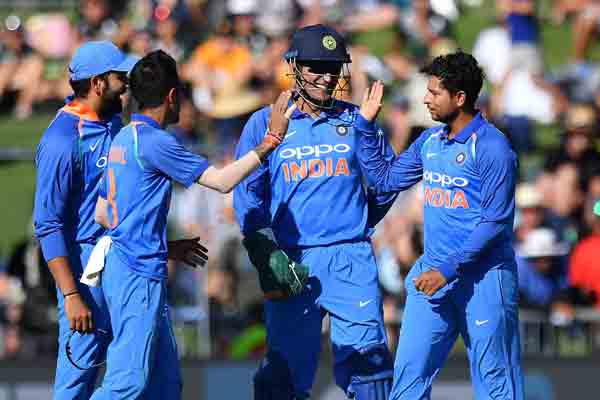 Indian squad celebrating a dismissal during a match.

India is on a roll. At the rate they are going, even if rains plays truant for the rest of the tournament, the Men in Blue should reach Lords comfortably (“Rohit stars as India beat Pakistan to maintain perfect WC record, June 17, Gulf Today).

While it was a disciplined show of skill by the Indians, their counterparts failed in almost all departments of the game. Team India was clinical so much so that it looked like a one-sided affair. Though rain clouds threaten to mar one of the sport’s greatest rivalries, it was not able to subdue the spirit of either the players or the fans watching the game the world over. I was seated with some of my friend at a local club watching the match on a large outdoor screen and the mood was charged right from the first ball.

I am not sure if Pakistani skipper Imran Khan advice to Sarfaraz to bat first if he wins the toss, would have made a difference because Pakistan surely lacked the firepower of Kohli’s men.

As for Kohli it was another opportunity to add feathers to his cap. The skipper became the fastest player in the history of the game to cross the 11,000-run mark in ODIs, — only the third Indian after Tendulkar and Ganguly and ninth cricketer overall to reach the milestone.