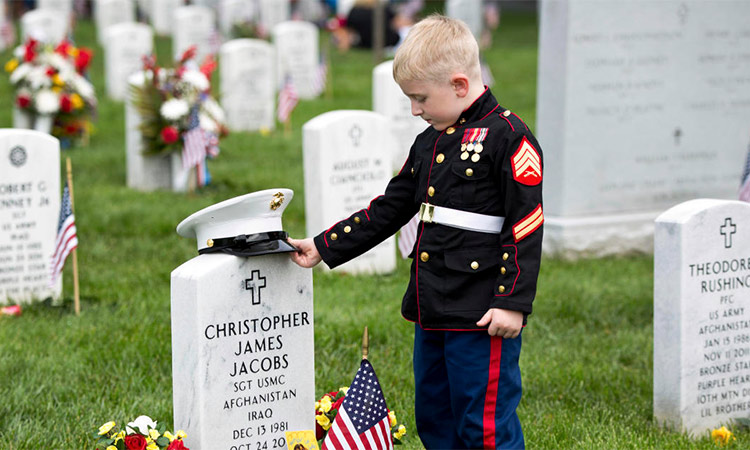 Jacobs, 5, dressed as a Marine, stands at his father's gravestone on Memorial Day at Arlington National Cemetery in Arlington. Reuters

After Memorial Day comes D-Day and the 4th of July. Through speeches, parades, cemetery ceremonies — and even our choice of clothing — we declare our common American heritage, our values and our willingness to make sacrifices for the sake of liberty.

Increasingly evident, however, is the tendency to separate the “Give me liberty or give me death” spirit of Patrick Henry from quotidian actions we take — or tolerate — that seem anathema to the sort of robust democracy for which so many have given their lives.

Consider the annual Memorial Day Concert held on the west lawn of the Capitol. It can sometimes verge on mawkish reverence and deliberate manipulation of our emotions with tearjerker stories of men and women who gave their all in battle. With civilian and military performers offering fanfares, hymns and pop tunes emphasising “God Bless America” in one form or another, we remember the dead, and we honor the wounded warriors who return home to an insensitive, quick-to-forget general populace.

Gen. Colin Powell, the former secretary of state, asserted that the concert “has become our national moment to grieve, to remember and to honor the nearly 1.5 million Americans in our history who sacrificed everything for our country and its freedoms.” In his eyes we are “one American family forever woven together in strength and unity by their service and their sacrifice.”

Perhaps for a moment or two a lot of us were that on Monday. For too many of us, however, Memorial Day is about barbecues and bargains and maybe baseball games. Then it’s back to a normal that now tolerates abominations like the fake Nancy Pelosi video circulated on social media — and gleefully shared by the president and his allies. The deliberately altered video purported to show the speaker of the House as incapacitated and perhaps inebriated. “PELOSI STAMMERS THROUGH NEWS CONFERENCE,” the president tweeted last week.

Are we losing our minds when this becomes just another kooky thing? How does this square with honouring those who have fought and died for our country’s ideals?

Earlier this month photos of 34 black women cadets preparing to graduate from West Point went viral. The novelty of seeing so many women warriors probably intrigued some; a sense of “we have arrived” struck women, racial minorities and allies in the struggle. But when a friend’s three-word reaction to the story was, “This is good,” I felt the need to take issue. “It’s definitely significant; but ‘good’ is a matter of perspective,” I said. “I wish we didn’t have to ‘study war no more.’”

On Sunday, Vice President Mike Pence, a former radio talk show host, told graduating West Point cadets to expect to see action in Afghanistan and Iraq and painted a picture of the world as “a dangerous place.” On Monday, General Powell, the former combat soldier, said: “We offer a fervent prayer that future generations will not have to endure the devastation of war.” It’s too bad presidents, vice presidents and cabinet members don’t have to actually leave their comfortable offices to lead troops into battle the way medieval kings did.

We must not cavalierly play chicken in the diplomatic arena as our current president seems willing to do with his bombastic Twitter tirades. “If Iran wants to fight, that will be the official end of Iran. Never threaten the United States again!” the president tweeted earlier this month.

His sabre-rattling doesn’t extend to North Korea, whose leader he apparently trusts, even though his own intelligence experts and US allies like Japan don’t. “North Korea fired off some small weapons, which disturbed some of my people, and others, but not me,” the president tweeted over the weekend.

The president, who had made more than 10,000 false or misleading claims by the end of April, according to the Washington Post’s count, wants the American people to trust him.

Our president thrives on big rallies where he can utter big lies to adoring and uncritical crowds, and he still wants a $100 million military parade to give us a show of American might. He’s taking his cues from the kind of tyrants our troops have toppled.