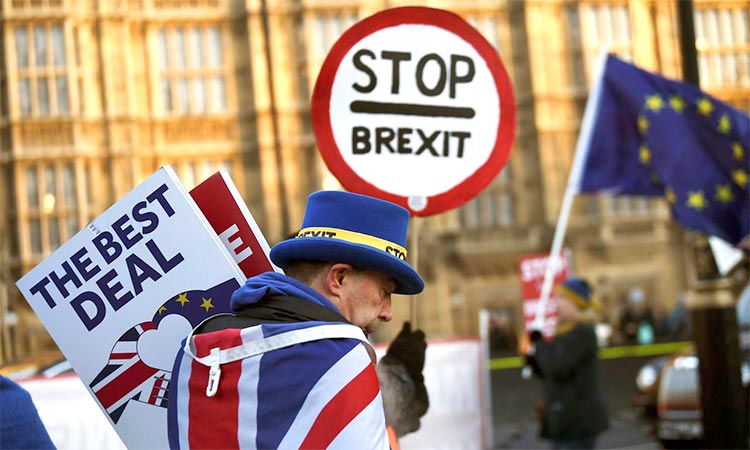 An anti-Brexit protester walks outside the Houses of Parliament in London. Reuters

The morning after election results are always funny. Watching political leaders and pundits spinning things in their favour never gets old.

Labour claims it held steady, the Conservatives say they expected worse and the Brexit Party is claiming to have changed politics forever. But one thing’s for sure; it has been a stunning few months for the Liberal Democrats.

In the local elections on 2 May we achieved our best ever results, gaining more than 700 new councillors and winning control of 12 councils. In contrast, the Tories lost more than 1,300 councillors and Labour nearly 100.

The results exceeded our highest expectations. And, after months – years even – of our dedicated activists campaigning tirelessly across the country, we deserved our victory.

Now we’ve had the European elections, elections that even we weren’t expecting to take part in. But boy, are we glad that we did. Our unambiguous “Stop Brexit” message has resonated with voters on an unprecedented scale. We have seen amazing results across the country where we have beaten both the Conservatives and Labour. It is clear that we are the strongest Remain party in the UK.

With our collective mojo back, newly elected Liberal Democrat MEPs will now take our rejuvenated energy to the European parliament and will continue the fight to stop Brexit once and for all.

Here in London – where we topped the poll – the resurgence of the Liberal Democrats is especially strong. We came first in 15 boroughs – including in Jeremy Corbyn’s Islington – and second in 14 others.

These results are particularly exciting for me because they amount to an excellent springboard for my mayoral campaign. The race for City Hall in 2020 has never been so interesting. Labour’s support has plummeted in London, and the once-popular Sadiq Khan is polling lower than ever because of his party’s muddled Brexit stance.

The Conservative vote has completely collapsed in the capital.  As they enter a bitter leadership battle, with hard Brexiters as frontrunners, they are likely to lurch more to the right and towards a no-deal scenario. This will distance them even further from the capital’s tolerant and global values. In that context, it beggars belief that they have selected a Brexiter as their mayoral candidate for 2020. (Let’s not forget, after all, that when Boris Johnson was the mayor of London he was a fully signed-up Remainer).

The message from Londoners couldn’t be clearer. They do not want us to “get on with Brexit” as Labour and the Conservatives claim. They want Brexit stopped. They want politicians to tackle the huge issues facing us here in the capital, across the UK and in Europe.  We have a knife crime epidemic, a homelessness crisis and an imminent climate change disaster – none of which are being talked about because of Brexit.

But none of this should come as a surprise. After all, London has always been a Remain city. There is no Brexit deal that is good for the capital. Every sector from hospitality to healthcare, from construction to the creative industries, relies on the free movement of people and frictionless trade with our European partners.

As the Labour and Conservative votes crumbled, I thought about the journey I have come on since running as an independent candidate in 2012. Back then I surprised everyone by beating UKIP and picking up more than 83,000 votes. This time, I have the largest and strongest Remain-machine in the country behind me. It’s suddenly very exciting.

With Labour and the Conservatives on their knees in London and with the Lib Dems surging in the polls, Londoners have an opportunity to send their loudest and strongest anti-Brexit, pro-European message yet.

Until now, the mayoralty has ultimately always been a two-horse race between two men: one Conservative and one Labour. That’s just not good enough for the London I know and love. Everything has changed. I am looking forward to what will be a very interesting campaign.