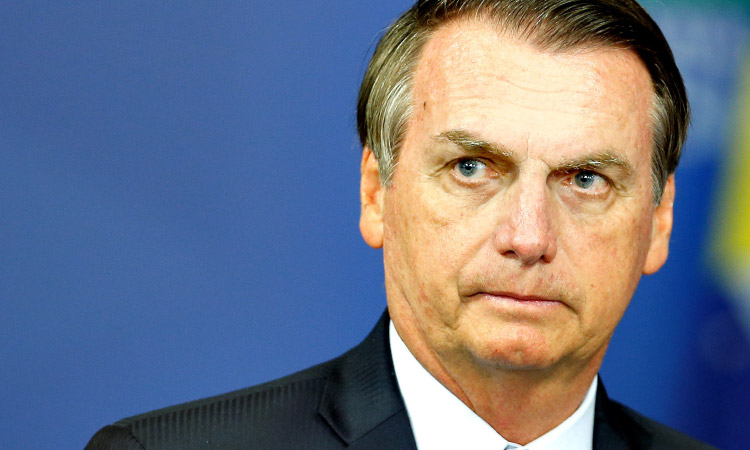 Earlier this month a procession of Brazil’s military Cabinet ministers came to President Jair Bolsonaro with the same clear message: muzzle your army of far-right keyboard warriors or your government will implode.

Propelled to the presidency by a vociferous army of online ideologues, including his sons, Bolsonaro’s government comprises an uneasy mix of radicals, pragmatists and economic liberals. In his five months in office, Bolsonaro has done little to rein in the extremist fringe, even when they target Congress, the Supreme Court and members of his own administration. The former members of the armed forces, who make up a third of his cabinet and constitute the moderate faction, have endured particularly vicious abuse.

Since the retired generals’ intervention, the public mud-slinging has ebbed a little, but the sense of division and improvisation in government has not. Bolsonaro’s approval ratings are sliding fast, while prominent erstwhile supporters who hoped for clean, decisive government have recanted, and legislators are beginning to jump ship. Even in financial markets, which helped carry the retired paratrooper to office, hope is fizzling. The real earlier this week reached an eight-month low. The presidency did not respond to a request for comment.

“I’m amazed by how weak Bolsonaro is politically. The government has everything going for it but sabotages itself with controversy and insults,” said Renato Nobile, a Bolsonaro voter and the CEO of Genial Advisory, which manages over 30 billion reais ($7.4 billion) in assets. “Many people want the military, Mourao is more skilled than Bolsonaro,” he said in reference to Vice-President Hamilton Mourao, a four-star general.

At stake is not just a reform agenda needed to kick-start Latin America’s largest economy but the survival of a president who questions his own ability to govern. In the corridors of Brasilia there’s talk of resignation or even impeachment, a process which brought down another president just three years ago. But the chatter is less a sign of active plotting and more one of frustration with a president unwilling or unable to engage in politics.

“There is the possibility of voting for an impeachment, it’s a word that has to be considered,” said Kim Kataguiri, a lawmaker from the influential DEM party and one of the founders of the Movimento Brasil Livre, a Tea Party-like libertarian pressure group.

Whereas previous Brazilian governments have often papered over their differences in public, while quarreling bitterly behind the scenes, the battles between the various factions of the Bolsonaro administration are fought out in the open. Brutal social media rows dominate headlines, with Olavo de Carvalho, a US-based writer and astrologer performing the role of flamethrower-in-chief, with Bolsonaro’s three eldest sons — a senator, a congressman and a city councilor — frequently chiming in.

“His children make these messes worse,” Joao Luiz Woerdenbag Filho, a famous musician and former Bolsonaro cheerleader known as Lobao, said in a recent interview with the newspaper Valor. “They’ve managed to sow hatred in a Congress that was ready to receive them with open arms.”

Attacks among allies have poisoned the atmosphere in Brasilia, complicating Bolsonaro’s legislative agenda, including a pension reform deemed crucial to putting the country’s finances on a stable footing. The situation became so tense that earlier this month a senior player at the heart of Brazil’s political wranglings had a nervous breakdown during an interview with Bloomberg News.

Indeed, as the stand-off deepens, Brazil’s economy drifts further into the red. Unemployment remains stubbornly high at almost 13% and the public debt stands at a record level.

Government institutions are often paralyzed in the crossfire. The agency that should be promoting Brazilian trade and investment has had three chiefs in the first four months of the year. In the resulting confusion, Brazil failed to support its filmmakers in Cannes for the first time in over a decade.

Meanwhile the president’s approval rating has taken a hit. A poll published on Tuesday showed that the percentage of Brazilians who reject his government surpasses those who support it.

“Right now it’s very difficult to imagine that he is going to complete his mandate, because he’s creating so many problems,” Mauricio Santoro, a professor of political science at Rio de Janeiro’s state university, said. “Can you imagine four years of that?”

Hundreds of thousands of protesters took to the streets last week to demonstrate against planned cuts to the education budget. The government’s belligerent response to their grievances — characterized by the president’s description of the participants as “useful idiots” — only served to swell their number.

In response, some of Bolsonaro’s more radical supporters had called for a pro-government rally on Sunday, an idea that would appear to have little upside and has alienated yet further some of his political allies.

“Wake up! If the streets are empty on the 26th, Bolsonaro will realize that he will have to stop the dramatics and start working,” tweeted Janaina Paschoal, an influential state lawmaker from Bolsonaro’s own PSL party.

To be sure, Bolsonaro retains a solid core of supporters and many of his more radical fans won’t sit idly by to watch the man they hail as “the legend” be dethroned or bypassed. Sunday’s march offered an indication of how strong his die-hard support base remains. Successful passage of the pension reform bill may also restore the faith of some of his cheerleaders in financial markets.

Congress remains supportive of at least some of his aims. On Wednesday night, the lower house approved a decree he issued to reorganize the country’s executive branch, cutting ministries.

Impeachment, at present, remains unlikely, and too traumatic for many legislators to contemplate. But an alternative idea — to effectively sideline the president — appears to be gaining ground among some in Congress.

“If the government doesn’t work out, we’re going to go for parliamentarism,” said Jose Nelto, leader of the centrist party Podemos. “Let’s leave the president there, like the Queen of England. We don’t need to remove him.”