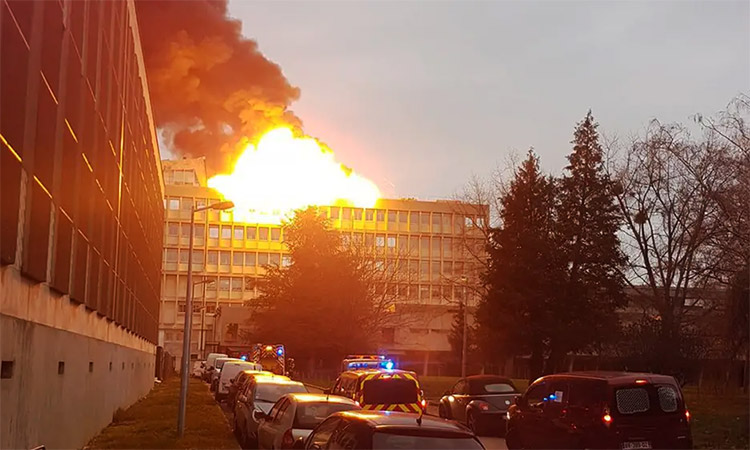 Video footage of the Lyon blast showed the sheer size of the fire with thick black smoke billowing into the sky. Reuters

The fear of terrorist attacks has gripped the residents of France once again. A blast in the heart of Lyon wounded 13 people, including a 10-year-old girl, on Friday shaking up the French.

The UAE was right to condemn the inhuman act.

The Ministry of Foreign Affairs and International Co-operation said: “The UAE strongly condemns and rejects such acts of sabotage which aim at destabilising France’s security and stability.”

The ministry reiterated the UAE’s unwavering stance against various forms of violence and sabotage, which target everyone regardless of religion and race. It called on the international community to unite to confront this serious scourge and eradicate it from its roots to ensure the security and peace of the world.

The suspect was seen on security cameras leaving a paper bag in front of a bakery. The package exploded about a minute after he left.

The blast occurred ahead of the hotly contested European Parliament elections.

Sources close to the investigation suspected the explosive was acetone peroxide, or APEX, a volatile compound that was used in the deadly Paris attacks on November 13, 2015.

France is home to the largest Muslim minority population in western Europe.

The country has been on high alert owing to a wave of assaults since the Parisian horror.

The latest was in December, when five people were killed and 11 wounded during a Christmas market bombing in Strasbourg, eastern France.

The last package bomb in France dates back to December 2007, when a blast in front of a Paris law office killed one person and injured another. Police could never determine who carried out that bloody act.

Nearly four years ago, three coordinated teams of gunmen and suicide bombers carried out attacks across the capital that killed 129 people in what President Francois Hollande had called an “act of war” by Daesh. The then French president had declared a state of emergency and set three days of official mourning as a stunned nation sought to comprehend the simultaneous raids on restaurants, a concert hall and the national soccer stadium on a busy Friday evening.

Prosecutors had said the slaughter – claimed by Daesh as revenge for French military action in Syria and Iraq – appeared to involve a multinational team with links to the Middle East, Belgium and possibly Germany and home-grown French roots.

The bloodshed came as France, a founder member of the US-led coalition waging air strikes against Daesh, was already on alert for terror campaigns, raising questions about how such a complex conspiracy could go undetected.

It was the worst such attack in Europe since the Madrid train bombings of 2004.

If confirmed, the infiltration of militants into the flow of refugees to carry out attacks in Europe could have far-reaching political consequences.

The attacks fuelled a debate raging in Europe about how to handle the influx of hundreds of thousands of refugees and other migrants propelled by civil war in Syria, Iraq and Libya.

The thing to note is that terrorism is not something to be complacent about. It has a repeat focus, striking as much panic as possible in people’s hearts. It could strike again, maybe in France, or in some other country. Eternal vigilance is key.